Source: DTN News - - This article compiled by Roger Smith from reliable sources Asian Defense News
(NSI News Source Info)
TOKYO, Japan
- April 6, 2011:
Sumo tournaments will restart in Japan next month, with spectators offered free entry in May as the sport looks to recover an image tarnished by a match-fixing scandal. 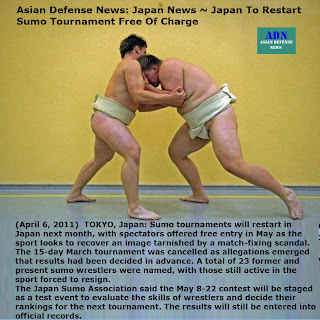 The 15-day March tournament was cancelled as allegations emerged that results had been decided in advance. A total of 23 former and present sumo wrestlers were named, with those still active in the sport forced to resign.

The Japan Sumo Association said the May 8-22 contest will be staged as a test event to evaluate the skills of wrestlers and decide their rankings for the next tournament. The results will still be entered into official records.

The association said it had decided to make the event free of charge because the quality of the field had been diluted by the retirement of a number of wrestlers in the top division.

"Please let us apologise for causing trouble to every fan and every person concerned," Hanaregoma, chairman of the association, told a news conference.

He said it was still too early to resume a full regular tournament as probes into the scandal continued and steps were being taken to prevent a recurrence of the match rigging.

"I want wrestlers to fight good bouts so that our fans realise anew that sumo is wonderful," he said, adding no decision had been made on charging for future tournaments.

The ancient sport has long been under suspicion over allegations that bouts were rigged, but no active wrestler had acknowledged guilt until last month when a number of incriminating text messages surfaced as police probed another scandal involving wrestlers placing illegal baseball bets.

On Tuesday, the association announced that the 22 tainted wrestlers had accepted its advice and retired.

But a stablemaster, Tanigawa, denied being involved in match rigging as a wrestler and refused to accept the advice and the association throw the 37-year-old out for his defiance.

Sumo, an ancient and highly ritualistic sport, has been shaken by a series of scandals in recent years, including illegal drug use and brutal training methods that resulted in the death of a teenage apprentice.