Defense News: KinetX Extends Its Reach To Unmanned Aerial Vehicle Systems
**Source: KinetX Inc
PHOENIX, April 5, 2011: KinetX, Inc., a small aerospace technologies company based in Tempe, AZ, has expanded its offerings with subsystems for Unmanned Aerial Vehicles, or UAVs. Currently working in this arena for the Department of Defense, KinetX drew on its engineers' considerable background in communications systems for satellites and for Motorola's ground based cellular systems. 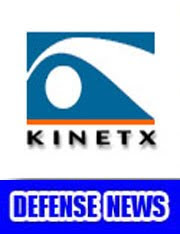 The KinetX Hardware Engineering group is formed from the core team that designed and built the processors for the Iridium® global satellite communications system, and became part of the KinetX team several years ago.

KinetX, Inc. has about 70 employees and provides high-end aerospace services and products in the areas of software, systems, and hardware engineering, and has a special focus in the area of orbital and space flight dynamics for deep space as well as earth-oriented spacecraft. KinetX for many years has worked in the areas of commercial, scientific, and Department of Defense endeavors.

The company provided critical support for Motorola's efforts in building the Iridium system, in various areas, such as orbital dynamics software, mission planning, and earth station calibration. KinetX recently achieved the distinction playing a key role in navigating the MESSENGER spacecraft into orbit around Mercury, a first for space exploration. KinetX has worked numerous contracts for Department of Defense systems, including communications systems, satellite systems for missile defense, and space situational awareness.

KinetX also recently achieved a CMMI Level 3 assessment from the Software Engineering Institute and is the first small or medium sized company in the greater Phoenix, AZ area to do so.

KinetX prides itself on the individual talents of its workforce, whose people come from organizations such as Lockheed, Motorola, the Jet Propulsion Laboratory, MIT, and other distinguished institutions. Many have marked notable achievements prior to joining KinetX, including designing and building systems for NASA shuttle missions and NASA scientific spacecraft, designing and building base stations for cellular networks, planning the early growth of Federal Express, and many more. KinetX takes a comprehensive, forward-looking systems view in its work, and is often called upon by large aerospace organizations to not only help get systems designed, but also develop, test, and validate them operationally.