Latest developments in the unrest sweeping the Arab world from North Africa to the Persian Gulf:

Moammar Gadhafi's forces hit the rebellion's heartland with airstrikes, missiles and artillery. Rebels rush to the front and send up two rickety airplanes to bomb government ships, as mosques broadcast pleas for help defending a key gateway city to the rebel-held east.

The dramatic turn in Gadhafi's fortunes outpaces French and British efforts to build support for a no-fly zone, which falls apart in the face of German opposition and U.S. reluctance.

Clashes sweep the country a day after a Saudi-led military force arrives to defend its Sunni monarchy from a Shiite-led protest movement demanding political freedoms and equal rights. Hundreds of demonstrators are injured by shotgun blasts and clubs, a doctor says, and the king declares a three-month state of emergency. 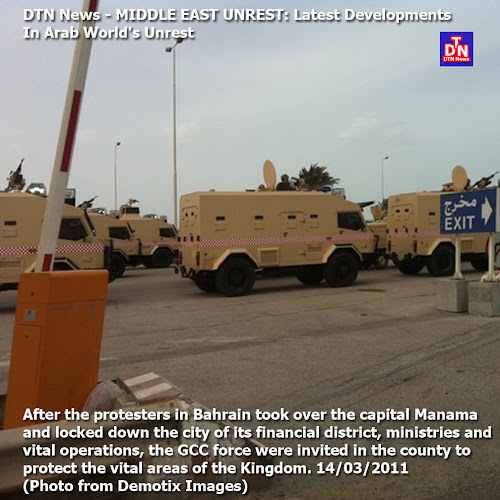 One demonstrator is shot in the head and killed, and a Saudi official says one of his country's soldiers is shot dead by a protester.

Egypt's new interior minister dissolves the country's widely hated state security agency, which was accused of torture and other human rights abuses in the suppression of dissent against ousted President Hosni Mubarak's nearly 30-year rule. Dismantling the agency was a major demand of the protest movement that led the 18-day uprising.

Anti-government tribesmen in the north storm a security building and shoot dead four soldiers in a revenge attack after government troops open fire on opposition protesters calling for the president's ouster, witnesses say. The attack is a significant escalation by the anti-government side in a month of daily street protests in which stone-throwing demonstrators have clashed with security.