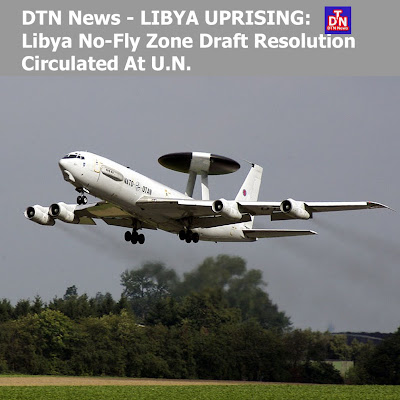 The draft was distributed at a closed-door meeting by Britain and Lebanon after the Arab League called on the council on Saturday to set up a no-fly zone amid advances by leader Muammar Gaddafi's troops against the rebels based in the east.

The draft, obtained by Reuters, says the council "decides to establish a ban on all flights in the airspace of (Libya) in order to help protect civilians."

It could also open the door to military action beyond a no-fly zone. The draft explicitly "authorizes members of the League of Arab States and other states which have notified the Secretary-General ... to take all necessary measures to protect civilians and civilian objects in (Libya)."

After receiving the draft, members of the 15-nation council adjourned without taking action and were due to reconvene on Wednesday to engage in what British U.N. Ambassador Mark Lyall Grant said would be "paragraph-by-paragraph" discussion.

A spokesman for British Prime Minister David Cameron told reporters in London the negotiations would not be easy.

"There are a very broad range of views in the council," he said. "We are going into this with our eyes open. We are under no illusions. This will be a difficult negotiation."

The draft also provides for the expanding of sanctions already slapped by the U.N. council on Libyan leaders on February 26 -- including asset freezes, travel bans and an arms embargo -- to cover all assets abroad of the Gaddafi government.

The White House said President Barack Obama discussed efforts at the United Nations and potential Security Council action during a meeting with his national security team on Libya earlier on Tuesday. White House officials were not immediately available to comment on the draft resolution.

Some key council members including the United States, Russia and Germany, have expressed doubts about whether a no-fly zone is advisable or would work.

Washington has said Arab nations should participate in enforcing the no-fly zone, which would mean the use of Arab aircraft that might have to shoot down Libyan planes violating the flight ban.

"We raised questions we felt are still not fully answered, as to the Arab participation in such a measure, as to whether the implementation of such a zone would run counter to the intention of the Arab League itself, the Arab League having pointed out that there should be no foreign intervention," Wittig said.

Lebanese Ambassador Nawaf Salam said there was no contradiction. "Foreign intervention is something else," he said. "We hope (a no-fly zone) would have a deterrent effect."

Chinese Ambassador Li Baodong, president of the Security Council this month, said, "Some members have questions, and they need clarifications before a decision is made.

"Just like other members, China also expects our Lebanese colleague to give us clarification and answers tomorrow," Li said.

Indian Ambassador Hardeep Singh Puri expressed surprise at the intention to ban "all flights" over Libya and not just military ones. "We're still at a preliminary stage," he said.

French Ambassador Gerard Araud, whose country supports a no-fly zone, said he would like to see a vote on the resolution as early as Wednesday but doubted it could be that soon.

Before the meeting, Araud voiced impatience with the slow council response. "We are deeply distressed by the fact that things are worsening on the ground, that the Gaddafi forces are moving forward and the council has not yet reacted," he said.