The Israeli navy intercepted an Egyptian-bound ship carrying a large delivery of weapons off the country's Mediterranean coast on Tuesday, the military said. 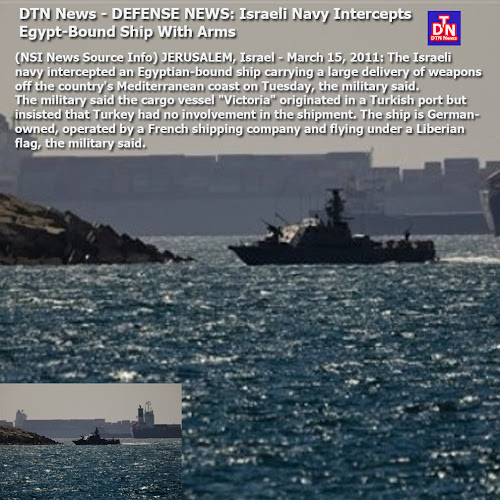 The military said the cargo vessel "Victoria" originated in a Turkish port but insisted that Turkey had no involvement in the shipment. The ship is German-owned, operated by a French shipping company and flying under a Liberian flag, the military said.

The interception occurred about 200 miles off Israel's Mediterranean coast and Israeli troops met no resistance. The vessel is now being hauled back to the Israeli port of Ashdod, according to the military.

The military gave no details on what types of arms were on board, but said it was intended for the use of terror organizations operating in the Gaza Strip. In the past, Israel has accused Hamas militants of shipping arms through Egypt.

German, French and Liberian authorities have been notified of the seizure.

The operation is reminiscent of the November 2009 Israeli takeover of the Iranian Francop vessel off the coast of Cyprus. Israel captured hundreds of tons of rockets, missiles, mortars, grenades and anti-tank weapons on board headed to Hezbollah guerrillas in Lebanon.

In January 2002, Israeli forces stormed the Karine A freighter on the Red Sea, and confiscated what the military said was 50 tons of missiles, mortars, rifles and ammunition headed for Palestinian militants in the Gaza Strip.