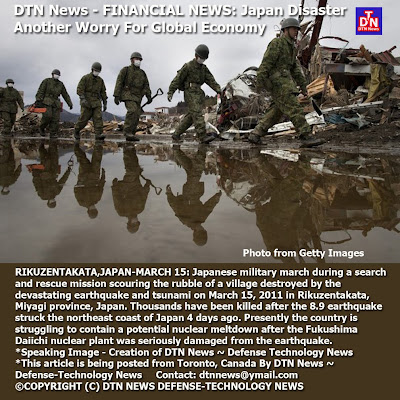 The disaster frightened financial markets in Tokyo and on Wall Street on Tuesday. Japan's Nikkei average lost 10 percent, and the Dow Jones industrials fell so quickly after the opening bell that the stock exchange invoked a special rule to reduce volatility.

Yet the damage to the U.S. and world economies is expected to be relatively moderate and short-lived. Oil prices are falling, helping drivers around the world. And the reconstruction expected along Japan's northeastern coast could even provide a jolt of economic growth.

A weaker Japanese economy could help ease global commodity prices because Japan is a major importer of fuel, agricultural products and other raw materials, notes Mark Zandi, chief economist at Moody's Analytics. Oil prices fell more than $4 to $97.18 a barrel Tuesday because of expectations that quake damage will slow Japan's economy and reduce its demand for energy.

"Japan has not been an engine of global or Asian growth for some time," says Nariman Behravesh, chief economist at IHS Global Insight. "This means that the impact of much lower Japanese growth on the world economy will be probably limited and small."

Japan is only half as important to the world's economy as it was during its last major disaster, the 1995 Kobe earthquake. And the area hit hardest by Friday's quake accounts for only about half as much economic output as the area damaged by the Kobe quake, the Organization for Economic Cooperation and Development estimates.

Japan proved resilient after the Kobe quake. Manufacturers returned to normal production levels within 15 months, according to the CLSA. Four in every five shops were back open in a year and a half. All told, Japan's comeback defied dire warnings that it would take a decade to rebuild.

Autos and auto parts make up more than one-third of U.S. imports from Japan. As a result, shutdowns of Japanese auto factories could disrupt production at U.S. plants owned by Japanese automakers.

At the same time, some U.S. auto parts makers could benefit if Japanese plants in the United States substitute U.S. parts for those they usually get from Japan, Behravesh says.

A big wild card is the fate of Japan's damaged nuclear power plants. The Fukushima Dai-ichi plant, the center of the concern, let off a burst of radiation on Tuesday. Radiation levels in the surrounding area subsided by evening, but unease in Japan did not.

"If the nuclear crisis turns into a full-blown catastrophe, then the negative effect on growth this year will be much larger," IHS' Behravesh says.

Another unknown is the impact of the disruptions to Japan's power supplies. Behravesh estimates about 10 percent of Japan's electricity generation could be off line for several months. If so, that would disrupt steel, auto and other production.

Investors fear that Japan will struggle to finance reconstruction, which is expected to cost the government at least $200 billion. The Japanese government's debt is already an alarming 225 percent of the country's economic output.

Some worry that Japan will sell some of its vast holdings of U.S. government debt to raise money. Doing so would push the prices of U.S. Treasury bonds down and yields up, raising U.S. interest rates.

But Treasury Secretary Timothy Geithner on Tuesday dismissed the fears of a Japanese fire sale of Treasury debt.

"Japan is a very rich country and has a high savings rate," he said. It "has the capacity to deal not just with the humanitarian challenge but also the reconstruction challenge they face ahead."

What's more, the Bank of Japan has been buying Treasurys and other assets as it pumps money into the financial system to restore calm.

For now, though, the latest quake, the resulting tsunami and the threat of contamination from a damaged nuclear plant have spooked financial markets. Investors are fretting about the effects on companies around the world. Japan, the world's third-largest economy, accounts for about 10 percent of U.S. exports.

The Dow Jones industrials rebounded after starting the day down almost 300 points. They closed down 137 points, or 1.1 percent. The futures markets, which can indicate whether stocks will rise and fall, looked so pessimistic before the opening bell on Wall Street that the stock exchange invoked a special rule designed to ease volatility.

Stocks plunged 5 percent in Germany and 4 percent in France. And in Japan, the benchmark Nikkei average lost more than 10 percent of its value in a matter of hours.

The quake damaged roads, ports, airports and factories in Japan, disrupting the shipment of goods in and out. The disaster blindsided multinational companies that were bracing for trouble in their transportation lines on the other side of the world — at the Suez Canal or elsewhere in the Middle East where protests are destabilizing countries from Bahrain to Libya, says Patrick Burnson, executive editor of Supply Chain Management.

It's shut down auto and auto parts factories. Analysts at Tong Yang Securities in South Korea "do not expect production to normalize anytime soon" in Japan. Even plants that stay open may have to wait for parts to arrive, a problem made worse because so many factories follow just-in-time supply management and keep few parts on hand.

Car plants in Thailand could have a harder time getting steel, much of which is imported from Japan.

Japan is a major supplier of NAND flash memory chips, commonly used in portable electronics. Japan-based Toshiba Corp., a big maker of the chips, was among the technology companies that temporarily closed facilities.

Prices for the chips jumped 10 percent from before the earthquake to Monday and another 3 percent Tuesday, according to Jim Handy, a director at Objective Analysis and an expert on the electronics and semiconductor industries.

The "wafers" that are key building blocks of computer chips are also commonly made in Japan. A shortage could pinch big buyers such as Intel Corp., the world's biggest semiconductor company, and Texas Instruments Inc. — though one firm, Barclays Capital, believes Texas Instruments has enough in stock to get by. Supplies are lean of capacitors and other electronics used in cellphones, which are also often made in Japan. Nokia Corp. relies heavily on Japan for those electronics.

Chinese companies are bracing themselves for losses and delays from disruptions in shipments of high-end electronics and auto components from Japan and some are looking for import replacements from South Korea or Taiwan, according to the International Business Daily, the official paper of China's Commerce Ministry.

Some analysts note that companies and consumers that now buy Japanese products can often find alternatives made elsewhere.

"What is made in Japan now has lots of competitive alternatives that didn't exist 25 years ago," says Peter Morici, a professor at the University of Maryland and a former director at the U.S. International Trade Commission. "If there aren't as many Camrys in the country this year as there might have been, you might have a couple hundred thousand additional Ford customers. If those people have good experiences with those cars, it could change buying patterns for life."

David Rea, an economist with Capital Economics in London, said, "You'll have Japan's competitors — largely South Korea and Taiwan, who are in high end manufacturing, and China as well — come in and undercut Japanese businesses experiencing disruption from the earthquake."

The reconstruction of Japan's northeastern coast might also provide business opportunities for foreign countries. Malaysian timber, for instance, will likely be needed to rebuild homes and other buildings. IHS predicts that the quake will "ultimately boost" U.S. exports to Japan.