Western and Arab warplanes were converging on Italy's air bases Sunday to join the international campaign to cripple the ability of Moamer Kadhafi's forces to attack Libyan civilians. 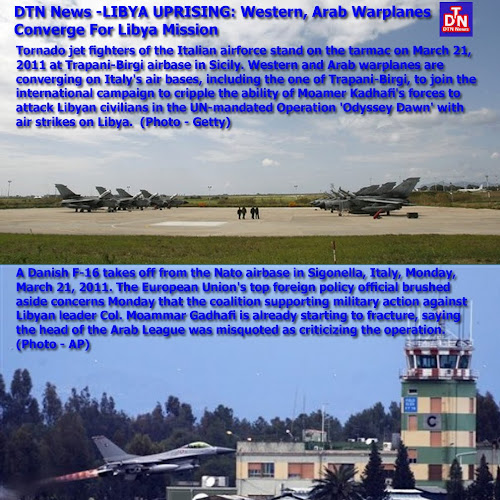 France, which on Saturday spearheaded the UN-mandated Operation "Odyssey Dawn" with air strikes on Libya, on Sunday also sent its aircraft carrier Charles de Gaulle to join the campaign.

The French Navy's flagship set off from the southern French naval port of Toulon at about 1:10 pm (1210 GMT) and was expected to reach the Libyan coast within 48 hours.

Meanwhile aircraft from the United Arab Emirates were due to arrive on Sunday at the Decimomannu air force base on the Italian island of Sardinia, which is already hosting four Spanish F-18 fighter jets that arrived on Saturday.

The UAE, along with Jordan, Morocco and Qatar, was among Arab nations that took part in a summit in Paris on Saturday on the Libyan crisis.

The Italian air bases are a key staging point for strikes by Western-led coalition forces to destroy Libya's air defences and impose a no-fly zone to prevent Kadhafi's forces from crushing a popular uprising.

Italian Defence Minister Ignazio La Russa said Rome also assigned eight combat aircraft, including four Tornado jets, for the operation and they can be used "at any time".

And British Defence Secretary Liam Fox said Typhoon and Tornado jets would fly this weekend to the Gioia del Colle air base in southern Italy, where they will be ready to deploy as part of the mission dubbed "Operation Ellamy".

Six Danish F-16 fighter were also ready to take off from Italy's Sigonella air base Sunday to join Odyssey Dawn which saw US, British and French forces hammer Libyan forces from the air and sea.

In the West's biggest intervention in the Arab world since the 2003 US-led invasion of Iraq, mounted exactly eight years earlier, US warships and a British submarine fired more than 120 Tomahawk cruise missiles into Libya on Saturday.

This prompted Kadhafi to warn on Sunday of a long war in the Mediterranean "battlefield" as Tripoli reported dozens of deaths.

Belgium said Sunday six of its F-16 fighter-bombers would be operational Monday for the Libya mission.

"We will be able to take part in operations under the command of the coalition from tomorrow," said Defense Minister Pieter de Crem, who added that 250 people would be assigned to support the six aircraft and their pilots.

In addition to its four F-18 fighter jets, Spain sent a refueling aircraft to Italy and said it would also deploy an F-100 frigate, an S-74 submarine and a CN-235 maritime surveillance plane to help enforce an arms embargo on Libya, once parliamentary approval has been received.

Spain had already announced on Friday it would allow NATO to use two military bases, at Rota and at Moron de la Frontera in the south of the country, for the operation over Libya.

The UN Security Council last week passed a resolution approving "all necessary measures" to impose a no-fly zone in Libya, protect civilian areas and pressure Kadhafi into accepting a ceasefire.

The Security Council last month also ordered an arms embargo against Libya and other sanctions against Kadhafi's family.