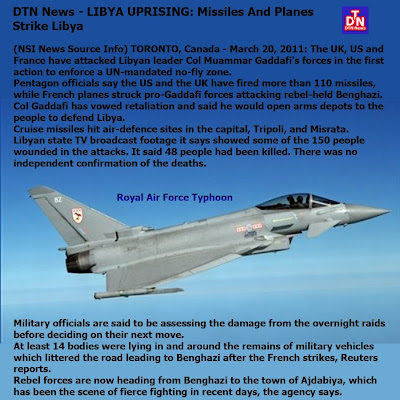 Pentagon officials say the US and the UK have fired more than 110 missiles, while French planes struck pro-Gaddafi forces attacking rebel-held Benghazi.

Col Gaddafi has vowed retaliation and said he would open arms depots to the people to defend Libya.

Libyan state TV broadcast footage it says showed some of the 150 people wounded in the attacks. It said 48 people had been killed. There was no independent confirmation of the deaths.

Military officials are said to be assessing the damage from the overnight raids before deciding on their next move.

At least 14 bodies were lying in and around the remains of military vehicles which littered the road leading to Benghazi after the French strikes, Reuters reports.

Rebel forces are now heading from Benghazi to the town of Ajdabiya, which has been the scene of fierce fighting in recent days, the agency says.

Hundreds of Col Gaddafi's supporters have gathered at his Bab al-Aziziyah palace and the international airport to serve as human shields, state TV said.

The AFP news agency reports that bombs were dropped near the palace, which the US also attacked in 1986.

In the early hours of Sunday morning, heavy bursts of anti-aircraft fire arced into the sky above Tripoli and several explosions were heard.

Sources in Tripoli told BBC Arabic that the attacks on the city had so far targeted the eastern areas of Sawani, Airport Road, and Ghasheer. These are all areas believed to host military bases.

The Western forces began their action on Saturday, after Libyan government forces attacked the main rebel-held city of Benghazi - Col Gaddafi's allies accused the rebels of breaking the ceasefire:

"It's a first phase of a multi-phase operation" to enforce the UN resolution, said US Navy Vice-Adm William E Gortney.

The BBC's Kevin Connolly, in the rebel-held eastern city of Tobruk, says that once the air-defence systems are taken out, combat aircraft can patrol Libyan airspace more widely and it will then become clear to what extent they will attack Col Gaddafi's ground forces.

This will determine the outcome of the campaign, he adds.

Russia and China, which abstained from the UN Security Council resolution approving the use of force in Libya, have urged all parties to stop fighting, as has the African Union.

After the missile bombardment and the air strikes, Col Gaddafi made a brief speech calling on people to resist.

"Civilian and military targets in the air and sea will be liable to serious danger in the Mediterranean," he said.

The Libyan leader called the attacks "a colonialist crusade of aggression. This can lead to open a new crusade war."

Our correspondent says it is now clear that Col Gaddafi's strategy is to portray the attacks as an act of colonialist aggression and rally enough of the Libyan people behind him to maintain his grip on power.

US President Barack Obama, speaking during a visit to Brazil, said the US was taking "limited military action" as part of a "broad coalition".

"We cannot stand idly by when a tyrant tells his people there will be no mercy," he said.

He repeated that no US ground troops would take part.

"In Libya, the civilian population, which is demanding nothing more than the right to choose their own destiny, is in mortal danger," he warned. "It is our duty to respond to their anguished appeal."

Canada is also sending warplanes to the region, while Italy has offered the use of its military bases.

Rebels in Benghazi said thousands of people had fled the attack by Col Gaddafi's forces, heading east, and the UN refugee agency said it was preparing to receive 200,000 refugees from Libya.

Col Gaddafi has ruled Libya for more than 40 years. An uprising against him began last month after the long-time leaders of neighbouring Tunisia and Egypt were toppled. 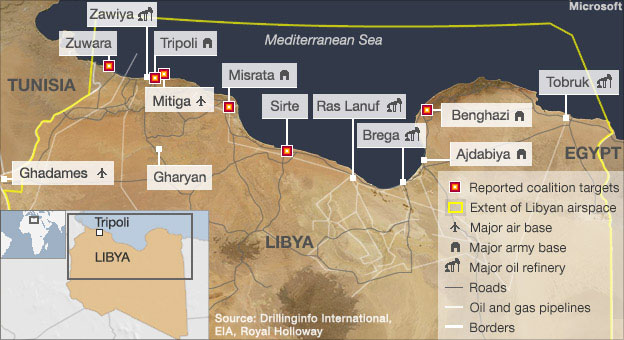 Are you in Libya? Are you affected? What is your reaction to the intervention? Send us your comments using the form below: