Western forces launched a second wave of air strikes on Libya overnight and officials in Tripoli said a missile intended to kill Muammar Gaddafi had destroyed a building in his fortified compound. 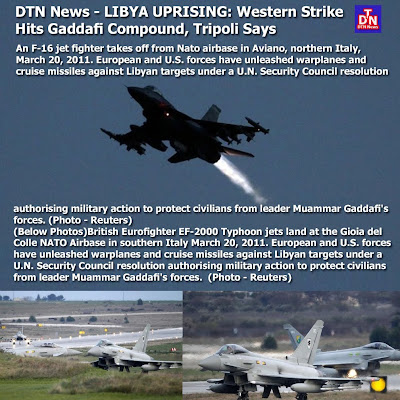 "It was a barbaric bombing," said government spokesman Mussa Ibrahim, showing pieces of shrapnel that he said came from the missile. "This contradicts American and Western (statements) ... that it is not their target to attack this place."

There was no comment on the strike from attacking forces.

The first air strikes on Saturday halted the advance of Gaddafi's forces on the rebel-held eastern city of Benghazi and had targeted Libya's air defences in order to let Western warplanes patrol the skies of this oil-producing north African desert state.

The second wave of Western air strikes also hit Gaddafi's troops around Ajdabiyah, a strategic town in the barren, scrub of east Libya that rebels aim to retake and where their fighters said they need more help to take the fight to the enemy.

"If we don't get more help from the West, Gaddafi's forces will eat us alive," rebel fighter Nouh Musmari told Reuters.

The U.N.-mandated intervention to protect civilians caught up in a one-month-old revolt against Gaddafi drew criticism from Arab League chief Amr Moussa, who questioned the need for a heavy bombardment, which he said had killed many civilians.

Moussa said on Monday however that the League respected the U.N. resolution while stressing a need to protect civilians.

The United States, carrying out the air strikes in a coalition with Britain, France, Italy and Canada among others, said the campaign was working and dismissed a ceasefire announcement by the Libyan military on Sunday evening.

STRIKES "FOR A LITTLE WHILE"

Henri Guaino, one of French President Nicolas Sarkozy's closest aides, said the strikes were not aimed at ousting the autocrat who has ruled Libya for 41 years but told RMC radio that they were likely to last "a little while".

Britain's Defence Ministry said one of its submarines had again fired Tomahawk cruise missiles as part of a second wave of attacks to enforce the U.N. resolution but that one air force mission was called off because of civilians in the target area.

"As the RAF GR4 Tornados approached the target, further information came to light ... As a result the decision was taken not to launch weapons," a ministry spokesman said, adding this underlined the British commitment to protecting civilians.

The Libyan government urged people in towns, cities and tribes to join a march from Tripoli to Benghazi "so we could exchange condolences, ... announce forgiveness ... and then we could sit down as one family ..."

The intervention in Libya is the biggest against an Arab country since the 2003 invasion of Iraq.

Withdrawal of Arab support would make it much harder to pursue what some defence analysts say could in any case be a difficult, open-ended campaign with an uncertain outcome.

Asked about Moussa's concerns about the conduct of the campaign, Michele Flournoy, Under Secretary at the U.S. Department for Defense, told the BBC:

"I think that may be the case that people don't understand the military dimensions of what was required to establish the no-fly zone but I can tell you that we continue to have ... statements of support from a number of Arab countries."

Italy said it had warplanes in the air, after U.S. and British warships and submarines launched 110 Tomahawk missiles on Saturday night and Sunday morning.

Vice Admiral Bill Gortney, director of the U.S. military's Joint Staff, told reporters there had been no new Libyan air activity or radar emissions, but a significant decrease in Libyan air surveillance, since strikes began Saturday.

BENGHAZI NOT FREE FROM THREAT

Benghazi was not yet free from threat, said Gortney, but Gaddafi forces in the area were in distress and "suffering from isolation and confusion" after the air assaults.

Late on Sunday night, Libyan officials took Western reporters to Gaddafi's compound in Tripoli, a sprawling complex that houses his private quarters as well as military barracks, anti-aircraft batteries and other installations, to see what they said was the site of a missile attack two hours earlier.

A short walk from a brightly lit tent where Gaddafi receives his guests, the three-storey building stood in ruins, and a circular hole was visible on its gutted facade. The United States says it does not have Gaddafi on its target list.

A Libyan military spokesman announced a new ceasefire on Sunday, saying that "the Libyan armed forces ... have issued a command to all military units to safeguard an immediate ceasefire from 9 p.m. (1900 GMT) this evening".

Both before and after he spoke, heavy anti-aircraft gunfire boomed above central Tripoli.

Outside Benghazi, smouldering, shattered tanks and troop carriers from what had been Gaddafi's advancing forces littered the main road. The charred bodies of at least 14 government soldiers lay scattered in the desert.

But with Gaddafi having vowed to fight to the death, there were fears his troops might try to force their way into cities, seeking shelter from air attacks among the civilian population.

In central Benghazi, sporadic explosions and heavy exchanges of gunfire could be heard in the streets late on Sunday evening. A Reuters witness said the firing lasted about 40 minutes.

In Misrata, the last rebel-held city in western Libya, a rebel spokesman said pro-Gaddafi forces were bringing in civilians from nearby towns to use as human shields and that those forces killed seven people there on Sunday.

Residents said water supplies were cut off and Libyan troops had encircled the town.

A Libyan government health official said 64 people were killed by Western bombardment on Saturday and Sunday, but it was impossible to verify the report independently.

Arab support for a no-fly zone provided crucial underpinning for the passage of a U.N. Security Council resolution last week that paved the way for Western action to stop Gaddafi killing civilians as he fights an uprising against his 41-year rule.

The U.S. Chairman of the Joint Chiefs of Staff, Admiral Mike Mullen, said the no-fly zone was now in place.

But Defense Secretary Robert Gates said the United States would not have a "pre-eminent role" in maintaining it, and expected to turn over "primary responsibility" within days, perhaps to Britain or France.

U.S. officials, eager to avoid similarities to the invasion of Iraq and the toppling of Saddam Hussein, have been playing down Washington's role and emphasising that overthrowing or killing Gaddafi is not the goal of the attacks on Libya.

Mullen told CBS television the endgame of the campaign was "very uncertain" and acknowledged it could end in a stalemate.

Gates told reporters: "I think this is basically going to have to be resolved by the Libyans themselves."

In Brussels, NATO envoys failed to agree on any alliance involvement in enforcing the no-fly zone.

NATO members Turkey and Germany have spoken out against the zone, and diplomats said France had argued against involvement by an alliance whose reputation in the Arab world had been tainted by its involvement in the war in Afghanistan.

French planes fired the first shots of the intervention on Saturday, destroying tanks and armoured vehicles near Benghazi.

France sent an aircraft carrier towards Libya and its planes were over the country again on Sunday, defence officials said. Britain said its planes had targeted Libya's air defences, mainly around the capital Tripoli.

Other countries, including Qatar, also dispatched aircraft to participate in the operation, U.S. officials said.