Google Inc on Monday accused the Chinese government of making it difficult for Gmail users to access the service in the country, the latest development in a rocky relationship between the two. 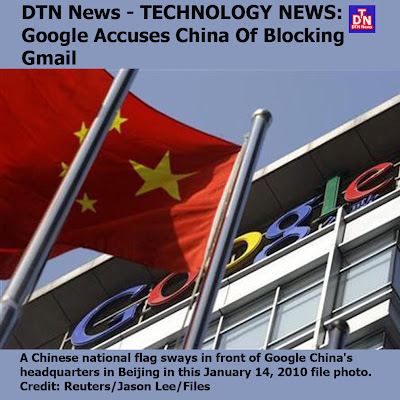 Google said any difficulty users in China may have faced in the past few weeks accessing its email service was likely to be the result of government blocks, a Google spokeswoman said in a statement.

"There is no issue on our side, we have checked extensively," the spokesperson said in an emailed statement. "This is a government blockage carefully designed to look like the problem is with Gmail."

Gmail users in China said they were still able to log in to their accounts, but were unable to perform tasks such as sending email and accessing their address books.

Google's run-ins with the Chinese government began in January 2010, when the company said it was no longer willing to censor search results in the country. Previously, the company included a disclaimer on its China service that searches may not be complete because of local laws.

This is not the first time Google has accused China of interfering with its services. In January, Google said it had uncovered sophisticated China-based attacks on human rights activists using its Gmail service around the world.

The months-long censorship dispute that Google had with the Chinese government was a diplomatic flashpoint in Sino-U.S. Relations in 2010.

China's foreign ministry did not immediately respond to a faxed inquiry.

Censorship of Web content has intensified in China following calls on foreign websites for a "Jasmine Revolution", which are anti-government gatherings inspired by demonstrations in the Middle East and North Africa.

(Reporting by Kelvin Soh in Hong Kong, Sui-Lee Wee in Beijing and Sakthi Prasad in Bangalore; Editing by Chris Lewis)