France has become the first country to recognise the Libyan rebel leadership, the National Libyan Council (NLC), as the country's legitimate government. 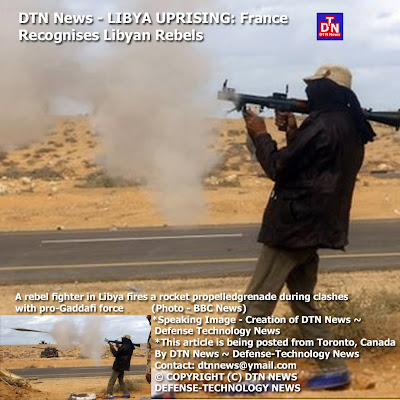 It comes as Nato is set to discuss military options in the Libyan conflict including a possible no-fly zone.

There is growing concern about the bombing of rebel-held areas by the forces of Col Muammar Gaddafi.

A BBC team which were detained and beaten up in Libya witnessed widespread mistreatment by the security forces.

In recent days pro-Gaddafi forces have tried to regain ground in the east, and have bombarded rebel forces in the town of Zawiya, 50km (30 miles) west of Tripoli.

The president of the International Red Cross said on Thursday there was a marked increase in civilian casualties in what he called a "civil war".

The move to recognition announced by the French presidency, a day after Euro-MPs urged the EU to recognise the rebels.

There has also been fierce fighting in recent days in Zawiya. On Wednesday, state TV said the army had retaken the town.

Late on Wednesday, three members of a BBC Arabic television team gave graphic accounts of how they were arrested and beaten by government forces outside Zawiya earlier this week.

They were subjected to mock executions and held for 26 hours in bloodstained cells, where they heard people screaming in adjacent rooms.

Feras Killani - a member of the BBC team who is of Palestinian descent - appears to have been singled out for repeated beatings.

The conflict in Libya has raged since mid-February when opponents to Col Gaddafi's 41-year rule seized many towns and cities in eastern Libya, following successful popular uprisings in neighbouring Tunisia and Egypt.

US Defence Secretary Robert Gates has said such a zone would need to begin with operations against Col Gaddafi's air defences.

On Wednesday, US Secretary of State Hillary Clinton told the CBS TV network: "We believe it's important that this not be an American or a Nato or a European effort. It needs to be an international one."

Our correspondent says there are differing levels of enthusiasm among members for such a mission and that no decisions are likely to be taken - although contingency planning may be intensified.

Nato Secretary General Anders Fogh Rasmussen has said the alliance is "not looking to intervene in Libya, but we have asked our military to conduct the necessary planning for all eventualities".