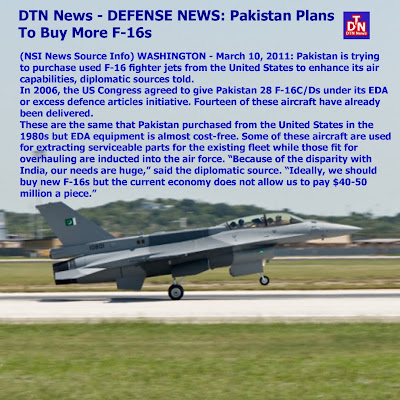 In 2006, the US Congress agreed to give Pakistan 28 F-16C/Ds under its EDA or excess defence articles initiative. Fourteen of these aircraft have already been delivered.
These are the same that Pakistan purchased from the United States in the 1980s but EDA equipment is almost cost-free. Some of these aircraft are used for extracting serviceable parts for the existing fleet while those fit for overhauling are inducted into the air force. “Because of the disparity with India, our needs are huge,” said the diplomatic source. “Ideally, we should buy new F-16s but the current economy does not allow us to pay $40-50 million a piece.”

The F-16 Fighting Falcon is a lightweight, compact fighter aircraft designed to perform a wide range of military missions. More than 4,000 F-16s have been or will be produced for 24 nations worldwide.

Meanwhile, the US media quoted Air Chief Marshal Rao Qamar Suleman as saying that while negotiating with the US for more aircraft, Pakistan was simultaneously developing its defence manufacturing capability to reduce its reliance on America.

According to these reports, he told an air chiefs` conference in Melbourne, Australia, that he had made a concerted effort to increase the manufacturing capability of Pakistan`s defence industry because the country has been subject to sanctions and embargoes in the past.

When asked about data links to tie F-16s to JF-17s, Air Chief Marshal Qamar said that Pakistan was working to develop its own solution.

“We have Link 16 on the F-16s. We will not fiddle with Link 16 and not have direct linkages [between the JF-17s] with the F-16,” he said. Pakistan also has different types of airborne early warning and control (AEW and C) aircraft.

Besides AEW and C aircraft, the air force chief said, “We are talking to some western companies about tankers too.”

When asked if Pakistan would like to be part of the Chengdu J-20, fifth-generation fighter programme, the air chief said: “We don`t have any involvement in this development so far. This seems to be an indigenous effort and we will keenly watch it. Obviously, China is a very good friend.” But it will be years before the J-20 becomes operational in the Chinese air force, he added.