The total cost of the Conservative government's plan to purchase 65 F-35 fighter jets over 30 years is close to $29.3 billion — billions more than previously estimated, according to Parliament's budget watchdog. 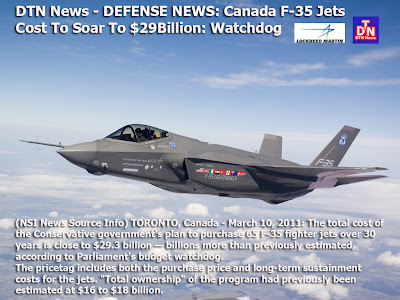 The pricetag includes both the purchase price and long-term sustainment costs for the jets. "Total ownership" of the program had previously been estimated at $16 to $18 billion.

Parliamentary budget officer Kevin Page, who has cast doubt before on the government's accounting practices, was asked by the Liberal Opposition to look at the F-35 deal with U.S. defence giant Lockheed Martin.
Previous reports by Page have questioned the government's deficit projections and its plan to cut the size and cost of the federal bureaucracy.
Thursday's report again puts him at odds with the Conservatives and gives weight to opposition party arguments that the purchase of the jets would cost more than the government has been saying.

To arrive at his estimate of $29.3 billion, Page said he used a "top-down" model that considered historical trends on the cost of aircraft and key cost drivers. Page estimates the acquisition cost for the fleet at $9.7 billion and the ongoing sustainment cost for it at $19.6 billion. The sustainment cost breaks down as follows:

Page cautions that any cost estimates, his own or those from other sources, should be viewed in the context of the methodology used and data available. He said he asked the department of national defence for clarification on the methodology it has used to arrive at its estimates.

"DND confirmed that such an analysis has not yet been undertaken," the report says.

A spokesman for the minister said national defence experts "stand by their cost projections." Jay Paxton said the government has committed $9 billion to acquire the planes and $250 to $300 million annually over a 20-year period to support the planes.

"This report is intended as a preliminary set of data for discussion. The F-35 is the only jet that can meet the needs of the Air Force, as noted by Mr. Page. Simply put, this is the best plane for the best price and we are confident in our acquisition," Paxton said.

Page was asked to weigh in on whether a competitive bid would have saved money compared to the cost of the sole-sourced deal, but Thursday's report doesn't include an opinion. Page says there is insufficient data for him to render an opinion on which procurement method would be best.

The Liberals want to cancel the deal and hold an open competition to buy new planes.

The timing of Page's report could prove to be critical because the Conservatives are weeks away from a possible defeat in the House of Commons. The budget is due to be presented on March 22 and if it doesn't pass, an election could follow. The government may also fall if a non-confidence motion is presented by the Liberal Opposition.

The Liberals have been using the F-35 deal as a line of attack against Harper.

The Conservatives plan to spend $9 billion on 65 planes to replace the CF-18s. The life cycle of that fleet is to end around 2017.

The Liberals say an open competition should have been held before the government decided to proceed with Lockheed Martin's jets. They are being purchased through the Joint Strike Fighter program, a multinational partnership that will see Lockheed Martin produce thousands of jets.

The government says it would be irresponsible to cancel the purchase of the jets, a plan developed with Canada's NATO partners, and Defence Minister Peter MacKay insists the cost of the jets is firm.

The government also says the deal would bring millions of dollars in benefits to the Canadian aerospace industry through contracts.

MacKay defended the $9-billion figure in the House of Commons Wednesday.

"We have committed $9 billion for the acquisition of 65 aircraft. These are the same aircraft that the party opposite committed to back in 1997," MacKay said, in reference to Liberal government's involvement in an earlier phase of the fighter jet program.

"This $9 billion is committed not only for the cost of the 65 aircraft, but also the associated weapons system, supporting infrastructure, initial spares, training simulators, contingency funds and project operating costs," MacKay said.

Page warns that the total pricetag for the F-35s is subject to change due to a number of factors including: possible modifications to the technical specifications of the aircraft, any reductions in the number of planes countries participating in the Joint Strike Fighter program end up purchasing and the "circumstances prevailing" when the planes are due for a mid-life overhaul.

He also points out that his analysis of the F-35 program is based largely on historical data and that the possibility exists that the F-35 deal won't fit with historical cost trends. "This means that it is possible that the F-35 constitutes an outlier, in that its costs might be significantly different relative to what the historical trend would suggest," the report states.

The fighter jet program has already been plagued by delays and cost overruns during the development phase of the aircraft. Page's report says that if those problems translate into a higher purchase cost, "overall production volume may be threatened."

Liberal industry critic Marc Garneau has argued that the government has refused to be honest with Canadians about the procurement deal and all its costs, and that money likely would be saved if an open competition were held.

"What they are telling us is that we're going to buy aircraft, but we're not going to tell you how much they cost," said Garneau on Wednesday.

"They refuse to issue a tender to ensure the Canadian Air Force is getting the best aircraft at the best price."