With the process of acquisition of the Medium Multi Role Combat Aircraft for the Indian Air Force entering the home stretch, the United States has suggested that India's decision on the contract will indicate the direction of the strategic relations between New Delhi and Washington. 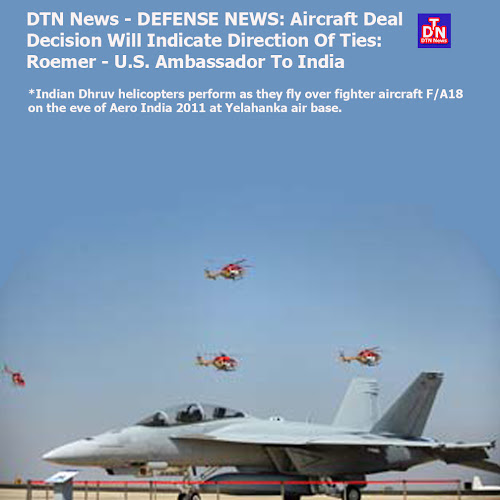 Expressing the hope that India would choose the aircraft of one of the two U.S. companies competing for the contract with four others, U.S. Ambassador Timothy J. Roemer said: “This becomes the next logical step in building this relationship. This will be a very important indicator of where this relationship goes in the 21st century.” He was addressing an international conference on ‘America and Asia: Perspectives on Peace, Security and Development,' organised by the American Studies Programme of the Jawaharlal Nehru University.

Six companies, including two American, are in the fray for the Rs.45,000-crore deal that is likely to be finalised the next financial year. Boeing and Lockheed Martin of the U.S have fielded F/A-18 Super Hornet and F-16 Super Viper respectively, Mikoyan of Russia (MiG-35), Dassault Aviation of France (Rafale), Eurofighter Gmbh (Eurofighter Typhoon) and Saab AB of Sweden (Gripen).

Speaking to journalists later, Mr. Roemer said the U.S. remained optimistic about the deal and wanted to build on its strategic ties with India. He acknowledged that there was a “vigorous competition” for the deal.

Referring to the delivery of the C130J Super Hercules transport aircraft, he said the aircraft being made available to India was “under budget,” a factor that assumed importance under tight budgets for defence acquisition.

Asked whether the bilateral ties could be affected if the aircraft deal was to be awarded to other companies, Mr. Roemer felt that the deal could be the logical step, and the U.S. was seeking to elevate India to be a global partner across the board.

Mr. Roemer said he was optimistic about what President Barack Obama said during his visit to India last year on supporting India for a permanent seat in the United Nations Security Council and taking India off the entities list.