DTN News: US, Canada And Russia Having Unique Exercise In NORAD to Test Hijack Response

Source: DTN News - - This article compiled by Roger Smith from reliable sources
(NSI News Source Info) PETERSON AIR FORCE BASE, Colorado - August 11, 2010: The United States and Russia, which have more bluster than cooperation in their often contentious history, will have their jet fighters take turns pursuing a civilian plane across the Pacific Ocean this week in a first-of-its-kind exercise to test their response to a potential international hijacking.
Aircraft and officers from Russia and the North American Aerospace Defense Command, or NORAD, a joint U.S.-Canadian agency, are to track the civilian plane, an executive-style jet that was playing the role of a hijacked civilian airliner.
The goal is to test how well the two forces can hand off responsibility for the "hijacked" plane. The three-day exercise started Sunday in Alaska.
Also participating in Operation Vigilant Eagle were both countries' civil air traffic control agencies.
Officials on both sides of the trust-building military exercise chose a mutual, modern-day interest — the fight against terror — to create an incident that could entangle the two countries.
"We try to anticipate any potential areas in which it might be necessary for us to launch fighter jets," said Major Michael Humphreys, a NORAD spokesman.
A terrorist hijacking, he said, "is every bit as probable as any other" scenario.
Moscow faces terrorist attacks by radicals from the North Caucasus. In March, suicide bombers killed 40 on the Moscow metro, and an explosion in November derailed a Moscow-bound train, killing 26. More recently, on July 29, a man caused a hijacking scare at Moscow's Domodedovo Airport when he seized a plane with 105 passengers and crew for about two hours. 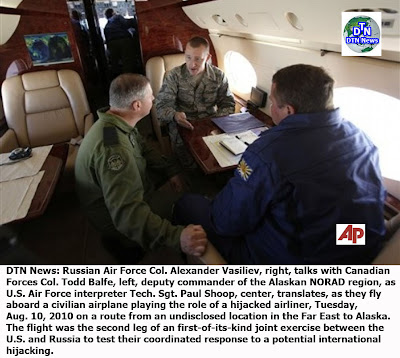 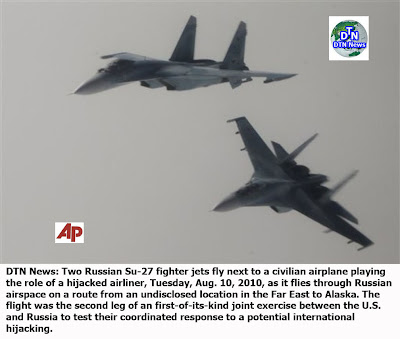 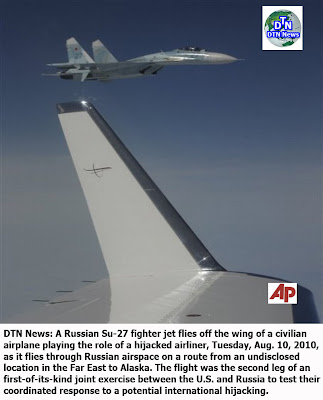 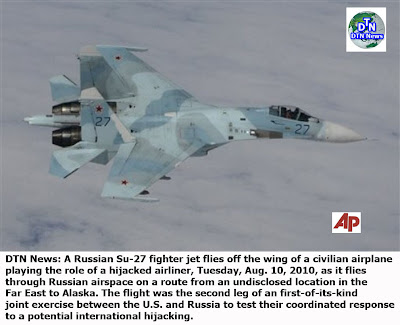 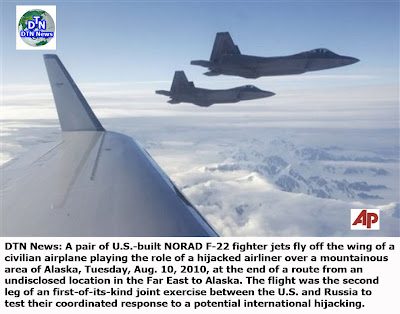 The United States is still wrestling with terrorist threats to airplanes and subways nearly nine years after the Sept. 11, 2001, hijackings. A Nigerian man is accused of trying to blow up a jetliner over Detroit on Dec. 25. Authorities thwarted a purported plot to carry out three suicide bombings on New York subways in September 2009.
It is unlikely that Vigilant Eagle was devised to deal with a specific threat, said John Pike, director of Globalsecurity.org, which tracks military and homeland security news.
The purpose is more likely a combination of confidence building and rooting out any communication and jurisdictional problems before they crop up in a real emergency, he said.
Pike cited the Korean Air Lines flight that the Soviet Union shot down in 1983, killing 269 people. There was an "interface" problem between the Americans and the Soviets because they were looking at different information, Pike said. "I could easily imagine [NORAD] looked at this and said, 'We don't know if we have the phone number of Russian air defense.' This is not something you'd want to improvise on the fly."
Progress has come in fits and starts since the Soviet Union collapsed, leaving Russia without the Soviet satellite nations. But the two countries have performed many joint exercises, including search-and-rescue scenarios, and have participated in multinational peacekeeping missions in places like Bosnia.
This is the first U.S.-Russian exercise involving NORAD, a U.S.-Canadian command that patrols the skies over North America, Humphreys said. NORAD's headquarters are at Peterson Air Force Base in Colorado.
Vigilant Eagle calls for NORAD F-22s flown by U.S. pilots to follow the "hijacked" plane west across the Pacific until it gets closer to Russian airspace, where Russian MiG-31s take over. On the return trip east, the process will be reversed.
Airborne warning and surveillance aircraft from each country will also take part.
Officers from Russia, Canada and the United States were aboard the target plane to observe, along with an interpreter. For a short time during the handoff, fighter jets from both sides were to be alongside the target plane.
The exercise comes at a time of improving relations between Washington and Moscow, after a low point in August 2008 when Russia sent troops into Georgia to side with a secessionist movement, drawing U.S. criticism.
Also complicating the relationship was the U.S. plan to put part of a missile defense system in Central Europe. That drew objections from Moscow because of the proximity to Russia's western border.
Vigilant Eagle, originally planned for August 2008, was postponed indefinitely as relations soured.
In early 2009, the administration of U.S. President Barack Obama began pursuing a "reset" with Russia, and relations began to improve.
Both sides may have something to gain from military-to-military cooperation beyond the practical knowledge that comes from a joint exercise.
The United States benefits from having better integration and cooperation with the Russian military elite, a group often seen as anti-Western, said Andrew Kuchins, a fellow at the Center for Strategic and International Studies in Washington.
"The more we can do of that, the better the mutual understanding will be," he said.
Russia, which is overhauling its military structure, will benefit from the chance to see how the all-volunteer U.S. force works, with its strong corps of noncommissioned officers, said Alexander Golts, an independent military analyst in Moscow.
"The Defense Ministry quite a while ago rejected the idea of mass mobilization and woke up to the idea" of a professional army, Golts said.
The need for a permanent, professional force capable of rapid deployment became obvious in the 2008 war in Georgia, he said.
Russia "welcomes any experience the country can gather to strengthen the ability" of a noncommissioned officer corps, he said.
Posted by DEFENSE NEWS at 9:02:00 AM