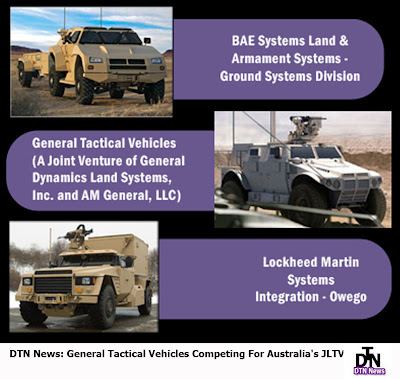 development of three joint tactical vehicles (JLTV) subconfigurations for Australia in the right hand drive and the delivery of two JLTV subconfiguration vehicles and one companion trailer for government testing.
Work is to be performed in Livonia, Mich. (47 percent); Sterling Heights, Mich. (41 percent); Muskegon, Mich. (9 percent); and South Bend, Ind. (3 percent), with an estimated completion date of May 19, 2011. Bids were solicited on the World Wide Web with seven bids received. TACOM Contracting Center, Warren, Mich., is the contracting activity (W56HZV-09-C-0108).
The joint light tactical vehicle (JLTV) is a new support vehicle programme being developed by the US forces, specifically the US Army, USSOCOM, and the Marine Corps to replace the rapidly ageing and outmoded high-mobility multipurpose wheeled vehicle (HMMWV), the design of which is over 25 years old.
The new JLTV vehicle range is expected to confer more survivability from insurgent attacks such as road-side bombings and will also have a greater payload. The HMMWV was not designed from the outset to be an armoured combat and patrol vehicle but nevertheless has been employed as one. In contrast the JLTV has been specifically designed for patrol and combat operations. The JLTV project has been able to benefit from some of the knowledge gained during the future tactical truck system (FTTS) project.
The JLTV range will contain five armoured versions including infantry combat vehicles, command vehicles, reconnaissance vehicles, and armoured utility vehicles.
There will probably also be an armoured personnel carrier and a number of other non-armoured versions for other purposes such as ambulances, utility vehicles and general purpose mobility.
There are several companies involved in the development of the JLTV project with several joint efforts having been established including Northrop Grumman and Oshkosh Corp, General Tactical Vehicle, a joint venture between AM General and General Dynamics Land Systems, Lockheed Martin and BAE (formerly Armor Holdings), BAE Systems and International Military and Government LLC, an affiliate of Navistar International Corporation (International Military and Government LLC is a wholly owned subsidiary of International Truck and Engine Corporation), Boeing, Textron, SAIC, DRS Sustainment Systems Inc and Force Protection Inc.
The three contract awards for development of JLTV prototypes will be in October 2008 with a JLTV system development demonstration phase planned to begin in 2012. After this two contractors will complete the design and development of the JLTV FoV (family of vehicles) and companion trailers and then compete to produce the multiple JLTV variants.
The MRAP-mine-resistant ambush-protected vehicle development has been given priority but all authorities agree that this will not replace the JLTV as it does not have the payload or versatility of the JLTV.
Posted by DEFENSE NEWS at 1:55:00 PM