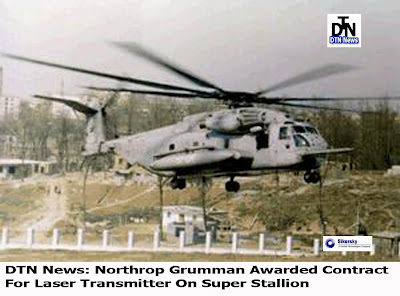 awarded an undefinitized contract action with an estimated value of $77,655,380 for the procurement of 121 AN/AAQ-24(V) 25 Guardian laser transmitter assemblies for installation on CH-53D, CH-53E, and CH-46E helicopters, including associated technical data.
The guardian laser transmitter assembly, a component of the large aircraft infrared countermeasures, is a next-generation directable laser-based countermeasures system for protecting helicopters and some fixed-wing aircraft from man-portable air defense systems. Work will be performed in Rolling Meadows, Ill. (39 percent); Edinburgh, Scotland (16.8 percent); Goleta, Calif. (10 percent); Blacksburg, Va. (9.4 percent); Boulder, Colo. (7.1 percent); Dallas, Texas (5.5 percent); Lewisburg, Tenn. (2 percent); Apopka, Fla. (1.8 percent); Woodland Hills, Calif. (1.3 percent); Tampa, Fla. (1 percent); Santa Clara, Calif. (1 percent); Melbourne, Fla. (1 percent); Wheeling, W.V. (1 percent); and various locations throughout the U.S. (3.1 percent), and is expected to be completed in August 2012.
Contract funds will not expire at the end of the current fiscal year. This contract was not competitively procured.
The Naval Air Systems Command, Patuxent River Md., is the contracting activity (N00019-10-C-0080).
The Sikorsky CH-53 Super Stallion heavy-lift helicopter first flew in 1974 and entered service with the US Marine Corps (USMC) in 1981. A total of 172 Super Stallions have been delivered and 165 are in service with marine corps squadrons in the Pacific Fleet and in the Atlantic Fleet. The helicopter is also in service with the marine corps reserve, training and experimental squadrons. The final Super Stallion for the USMC was delivered in November 2003.
The marine corps uses the Super Stallion in the amphibious assault role and for transporting heavy equipment. The US Navy also use the Super Stallion for vertical delivery and recovery of damaged aircraft on aircraft carriers.
In 2000, the USMC announced the CH-53X programme to upgrade the CH-53E and extend its service life to 2025. Upgrades would include a new engine, substantially increased payload capacity, all-composite rotor, elastomeric rotor head and glass cockpit with fly-by-wire controls.
In March 2004, a USMC analysis of alternatives (AoA) determined that a new-build airframe would be a more cost-effective solution. Sikorsky was awarded an initial system development and demonstration (SDD) contract for the new helicopter, which is designated CH-53K heavy-lift rotorcraft (HLR), in January 2006 and the full SDD contract in April 2006. The GE38-1B engine was selected to power the CH-53K in December 2006. Requirement is for 156 helicopters and service entry is planned for 2015.
Posted by DEFENSE NEWS at 1:56:00 PM