Source: DTN News - - This article compiled by Roger Smith from reliable sources including AFP
(NSI News Source Info) MOSCOW, Russia - August 11, 2010: Russia fought a deadly battle Tuesday to prevent wildfires from engulfing key nuclear sites as Prime Minister Vladimir Putin took to the air in a water-bombing plane to join the firefighting effort.
Two soldiers were killed by blazing trees as they strove to put out a fire dangerously close to Russia's main nuclear research centre, while workers were also mobilised to fight blazes near a nuclear reprocessing plant. 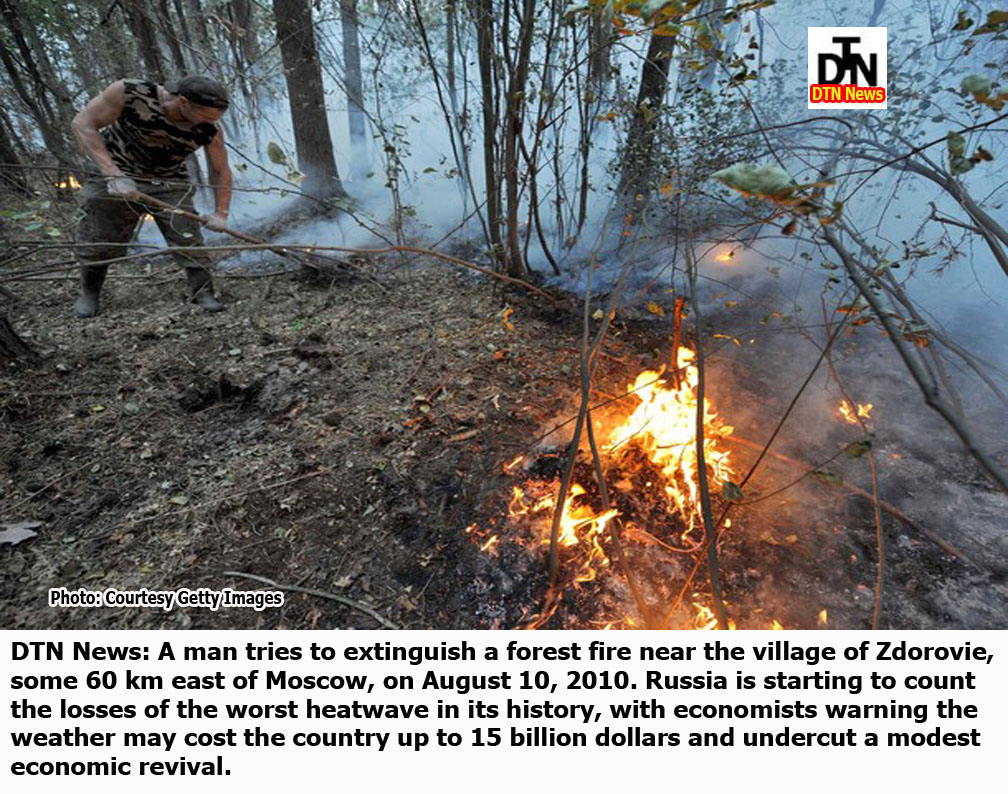 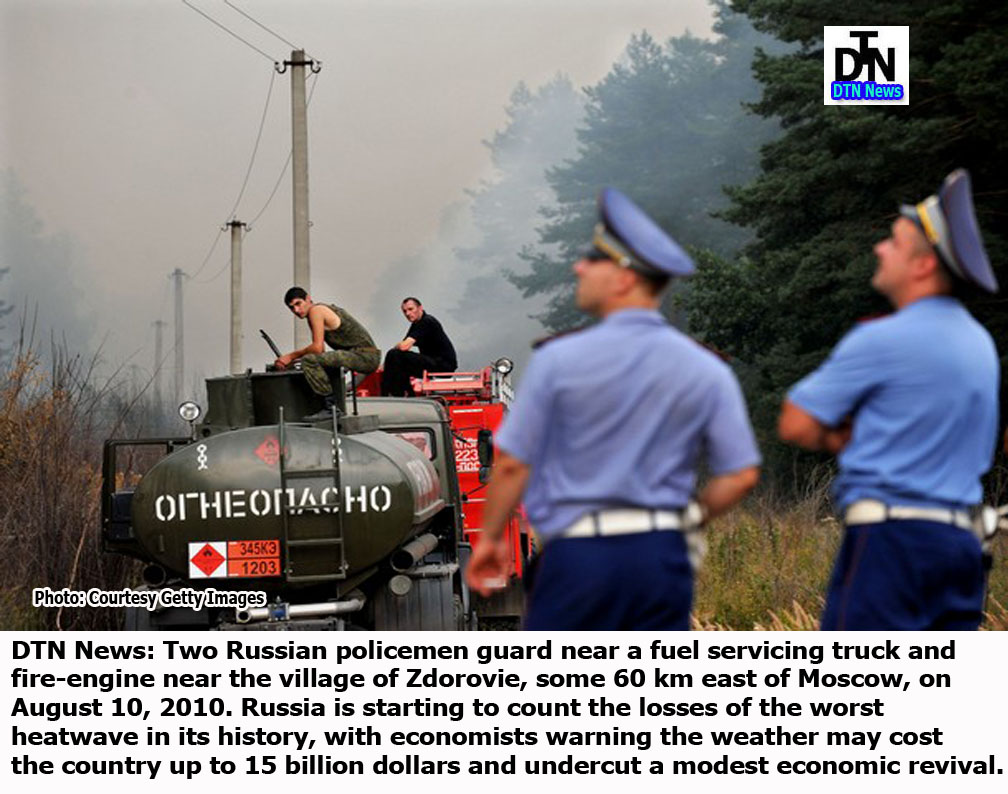 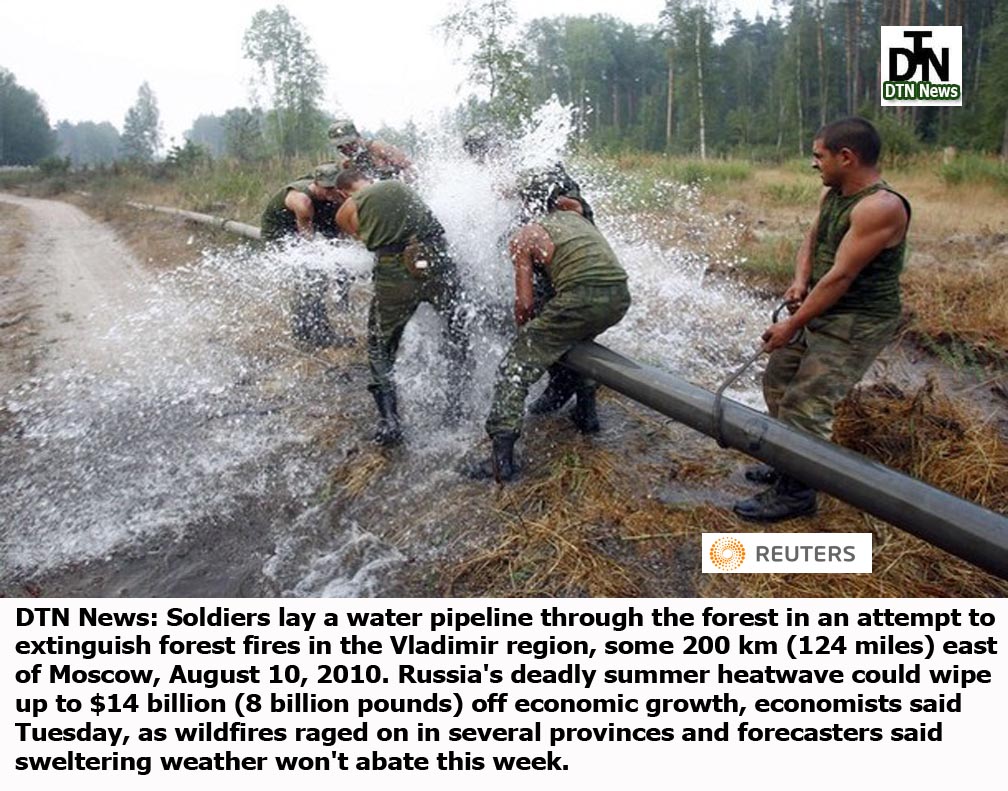 After almost two weeks of fires that have claimed over 50 lives and part destroyed a military storage site, the authorities said they were making progress in fighting fires that still covered 174,035 hectares of land.
Putin visited the Ryazan region south of Moscow, one of the worst hit, and jumped into a Be-200 jet to scoop up water from local lakes and then dump it on the fires, state media said.
State television showed the Russian strongman, headphones clamped against his ears, confidently taking the co-pilot's controls as the plane zoomed over the water.
"We hit it!" exclaimed Putin as his colleagues confirmed the water had struck the target.
The emergencies ministry said that over the past 24 hours, 247 new fires had appeared, more than the 239 had been put out, and 557 fires were still raging across the affected region.
The authorities have come under pressure to explain the magnitude of effects of the heatwave, which meteorologists have said is the worst in the 1,000-year history of Russia.
The head of forestry for the Moscow region, Sergei Gordeichenko, was sacked after President Dmitry Medvedev noted he had stayed on holiday as the fires burned, a spokesman told AFP.
"He was awaited but he never came... Why do we need such forest specialists? Let them take their holidays on the Canary Islands," Medvedev said Tuesday.
Two members of the Russian armed forces were killed Monday fighting wildfires around Russia's main nuclear research centre in Sarov, a town in the Nizhny Novgorod region still closed to foreigners as in Soviet times.
Rifle battalion member Vasily Tezetev, 22, "died the death of a hero" while dealing with the fire burning in a nature reserve close to the town, the local emergency centre said Tuesday, Interfax reported.
Vasily Veshkin, 27, who usually worked at a local prison camp, died fighting the fire on the same day, it added. Both were killed when they were hit by burning parts of trees that fell to the ground.
Officials said meanwhile that fires burning within 15 kilometres (10 miles) of Snezhinsk in the Urals, home to another of Russia's top nuclear research centres, had been reduced to a five-hectare area and there was no risk for the town.
The acrid smog from wildfires 100 kilometres (60 miles) out in the countryside that descended over Moscow eased Tuesday but forecasters said the air quality was still dangerously poor.
The Moscow authorities acknowledged for the first time on Monday that the daily mortality rate in Moscow had doubled and morgues were overflowing with bodies but the federal government has yet to confirm those figures.
Carbon monoxide in the Moscow air was 1.4 times higher than acceptable levels Tuesday, the state pollution watchdog said, a slight improvement from the day before. On Saturday they had been an alarming 6.6 times worse.
Sweden Tuesday advised its citizens against travelling to Moscow and regions ravaged by wildfires, in part because of the possible health consequences.
On Saturday Denmark also warned against travelling to the Russian capital unless strictly necessary.
Britain and Italy have issued lighter warnings against travelling to the region with children and for anyone who is pregnant, elderly or has health problems.
The heatwave has had a huge impact on all areas of Russian society and economists warned Tuesday the record temperatures could have cost the country up to 15 billion dollars and undercut a modest economic revival.
Worst hit has been agriculture, which has seen 10 million hectares of land destroyed.