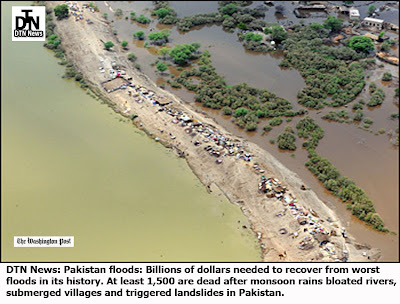 senior Pakistani officials said Monday.
Pakistan's plea is fueled by concerns that the government's inability to provide relief quickly could boost the appeal of militant groups that have rushed to supply aid in the country's northwest. Visible U.S. assistance, the officials said, could help reverse currents of anti-Americanism.
The United States has already diverted six Chinook transport helicopters from the Afghanistan war to Pakistanover the past 10 days for rescue missions and aid delivery. It has also sent hundreds of thousands of prepackaged military meals and a pledge of more than $40 million in disaster assistance, far more than any other country.
'Risk mitigation'
A senior U.S. military official said transfer of additional helicopters, which are in short supply in Afghanistan, would require a political decision in Washington. "Do they exist in the region? Yes," he said. "Are they available? No."
"It's a question of risk mitigation," the official said. "Helicopter lift is critical to the mission" in Afghanistan, where road transport is difficult and dangerous, he said. "It's not like we have a great surplus of helicopters in theater that are not engaging."
A White House official said that Pakistan has not delivered a formal request for more helicopters or vastly increased aid, but that "we are, of course, trying to respond to every request and to assist as best we can as it becomes evident what it is that they need."
The Obama administration has carefully calibrated its assistance to Pakistan over the past year to win popular support without exacerbating Pakistani suspicions of expanded U.S. military and intelligence activities.
In 2005, when U.S. helicopters rescued thousands of people after an earthquake in Kashmir that killed 73,000 people, the popularity of the U.S. military in Pakistan briefly surged. But the floods, while taking fewer lives so far, are much more widespread and promise upheaval that will last longer across most of the country.
The unprecedented floodwaters that have overtaken villages throughout the northwest part of the country are quickly rising across the southern plains as the Indus, Kabul and Swat rivers overflow their banks.
Clinging to rooftops
With the monsoon rain showing no sign of abating, the government estimates that 1,600 people have been killed, 650,00 homes have been destroyed, and more than 50,000 square miles are under water in a disaster still in its early stages.
"Hundreds and hundreds of thousands of other people are inaccessible: clinging to rooftops, swept away," Richard C. Holbrooke, the administration's special representative for Afghanistan and Pakistan, said. "The rains are continuing," he said, and the Sukkur dam, which holds back the Indus River from the agricultural plains of Sindh province, "is in danger." He added: "If it breaks, the situation will reach an even more catastrophic level."
Holbrooke said the administration is calling on other governments to help and is trying to mobilize the business community while pressing for individual contributions via a text-message system the State Department has set up. But, he said, "I'm concerned that perhaps people think that it's just another one of the endless tragedies that Pakistan endures."
Pakistani officials, bemoaning the setback to development plans already behind schedule, appear to be overwhelmed by the scale of the disaster. Many displaced villagers who have set up makeshift camps on high patches along roadways and hilltops have bitterly criticized their government in remarks to reporters who have managed to reach them.
Fearing unrest
"This can create a tremendous amount of social upheaval in the country," said Chief Marshal Rao Qamar Suleman, the head of the Pakistani air force, who arrived here this weekend for Pentagon meetings before heading to Nevada to observe Pakistan's participation in scheduled joint air exercises. "All these people have are the clothes on their backs," he said, and most have seen no sign of government assistance.
Roads, bridges and entire villages have been destroyed, along with electricity and water supplies, throughout the northern regions and across the Federally Administered Tribal Areas along the border, where the Pakistani military has been engaged in offensives against entrenched militant groups since last summer. "It's the same area where just a few months ago we were bombing," Suleman said in an interview.
"The need at this time is helicopters," he said. "That's the only answer."
Suleman estimated that the government needs 30 to 40 more transport and rescue aircraft. The six American Chinooks, as well as Pakistan's fleet of six U.S.-leased MI-17 transport helicopters, have been grounded during much of the past week by cloud cover and the torrential rains.
Pakistani officials have been effusive in expressing gratitude for the rapid U.S. response, a senior Pakistani official said, but the need "is enormous." The hope is that the United States can come up with at least another $100 million in disaster funding in addition to more helicopters, he said, speaking on condition of anonymity about the request, which is still being formalized.
"It takes time to organize" sending helicopters from a war zone, another senior Pakistani official said. "We understand that. But that man sitting on the roof of his house for three days without food or water, he doesn't understand."
The official continued: "The real trick is to reach these people in time. They need everything right now. The militants have money; they will start to distribute supplies. Even if it's only the most rudimentary things," villagers will conclude that "these people care, and that's a difficult feeling for the government to dislodge."
*This article "Fearing Unrest, Pakistan Seeks More U.S. Flood Aid - The Washington Post - By Karen DeYoung Washington Post Staff Writer Tuesday, August 10, 2010" & link to this article....click here.
*This article is being posted from Toronto, Canada By DTN News ~ Defense-Technology News, contact: dtnnews@ymail.com
Related Stories;
*Pakistan floods: Billions of dollars needed to recover from worst floods in its history
*Floods' devastation is seen as Taliban's opportunity
*US sending big helicopters to help flood relief
*U.S. Army joins rescue, aid efforts in flood-stricken Pakistan
*U.S. Army joins flood relief, rescue efforts in Pakistan
*Flood relief flights grounded in Pakistan
Posted by DEFENSE NEWS at 5:36:00 AM