Source: DTN News - - This article compiled by Roger Smith from reliable sources including TibetanReview.net, Aug08, 2010
(NSI News Source Info) TORONTO, Canada - August 11, 2010: J-11 planes, the most modern Chinese jet fighters said to be pirated copies of Russia’s Su-27, have for the first time been shown in training over the Tibetan Plateau recently. While the Chinese 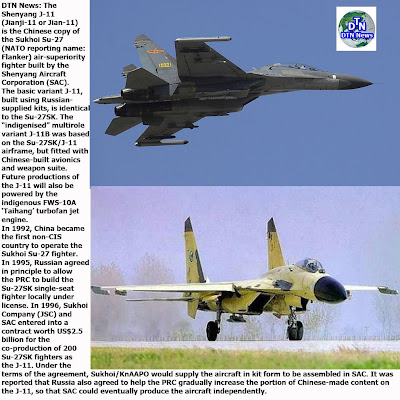 media only showed a picture of some of these planes in the air, with a caption referring to the training flight, Strategy Page online Aug 6 said, reporting on it, that China had no combat aircraft stationed in Tibet, saying there were logistical and attitude problems in doing so.
However, it said, J-7s (cloned from older, MiG-21 Russian jets) had been flying in regularly for temporary duty at major commercial airports in Tibet.
The report said the J-11 jets had been appearing in more unexpected places (like the Chinese naval air force), although fewer than 150 had been built since they were introduced in the late 1990s.
1995 China paid $2.5 billion for the right to build 200 Su-27s. Russia was to supply the engines and electronics, with China building the other components according to Russian plans and specifications. But after China built 95 of these aircrafts Russia cancelled the agreement, saying the former was copying Su-27 to build their own aircraft, the J-11.
The report said the main reason for not stationing fighter squadrons in Tibet had probably to do with the high altitude of the area, and the expense of moving large quantities of fuel and other supplies needed to maintain air units. It pointed out that there was only one rail line into Tibet (recently built) and few heavy duty truck roads.
China also has a serious problem in Tibet with altitude sickness among its troops. The report said the Chinese military was spending a lot of time, effort and money trying to solve this problem. It said currently, most of the troops in the Chinese Chengdu Military Region were in the eastern, lowland half. In the western portion (Tibet), they had stationed the 52nd and 53rd Mountain Brigades, and were struggling to keep these 5,000 troops fit for duty.
In case of an emergency, as there was two years ago, the nearby 13th and 14th Group Armies can send troops from their lowland bases, the report said. Over 20 percent of these troops will be hampered by altitude sickness once they reach the highlands, and commanders are trained to deal with that, it added.
It said that given the alertness required of aircraft maintenance personnel, and pilots preparing for flights, plus the logistical problems, the Chinese air force had declared Tibet fit to visit, but not to base aircraft units in. However, because the Chinese air force may one day have to fight in the air space over Tibet, training up there was necessary.
*This article "Chinese Fighter Jets Train Over Tibet - TibetanReview.net, Aug08, 2010" & link to this article....click here.
*This article is being posted from Toronto, Canada By DTN News ~ Defense-Technology News, contact: dtnnews@ymail.com
Disclaimer statement
Whilst every effort has been made to ensure the accuracy of the information supplied herein, DTN News ~ Defense-Technology News cannot be held responsible for any errors or omissions. Unless otherwise indicated, opinions expressed herein are those of the author of the page and do not necessarily represent the corporate views of DTN News ~ Defense-Technology News.
Posted by DEFENSE NEWS at 8:45:00 PM