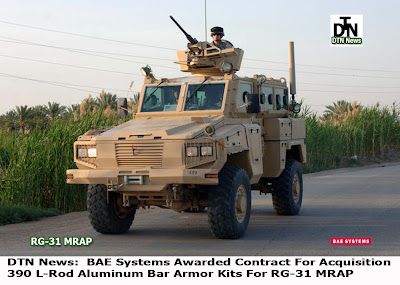 Austin, Texas, was awarded on Aug. 6 an $11,014,052 firm-fixed-price contract. This contract is for the acquisition of 390 L-Rod aluminum bar armor kits, associated bracketry required for kit installation, and field service representative support outside the contiguous United States, for the RG-31 Mine Resistant Ambush Protected vehicle on the base obligation for this undefinitized modification.
Work is to be performed in Austin, Texas, with an estimated completion date of Nov. 26, 2010. One bid was solicted with one bid received.
TACOM Contracting Center, Detroit Arsenal, Warren, Mich., is the contractign activity (W56HZV-09-C-0311)
*RG-31 MRAP - Tests have shown that these absorb some of the vertical impulse associated with mine blasts, reducing the likelihood of injury during large landmine explosions. Since 2004, BAE Systems has sold over 2,200 RG-31 vehicles, including a series of major orders for the US military which operates both the RG-31 and its stable-mate RG33, in Afghanistan and Iraq.
Of these, more than 1,300 RG-31 mine-protected vehicles have been delivered to the US and Canadian forces. The US RG-31s are manufactured by Land Systems OMC and also under licence by General Dynamics Land Systems Canada. In addition to ongoing US orders, several European countries are expressing interest in RG-31 mine protected vehicle for their forces, and a recent order from Spain for 100 vehicles, confirms this interest.
BAE Systems is the premier global defence, security and aerospace company delivering a full range of products and services for air, land and naval forces, as well as advanced electronics, security, information technology solutions and customer support services. With approximately 105,000 employees worldwide, BAE Systems’ sales exceeded £18.5 billion (US $34.4 billion) in 2008.
*This article is being posted from Toronto, Canada By DTN News ~ Defense-Technology News, contact: dtnnews@ymail.com
Posted by DEFENSE NEWS at 7:21:00 AM