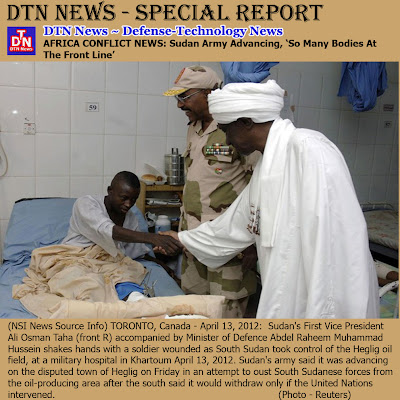 “Now we are moving towards Heglig town” and are “close,” army spokesman Sawarmi Khaled Saad said in a statement.
“The situation in Heglig is going to end in coming hours,” he told reporters, adding that South Sudan had tried but failed to control “all of South Kordofan state.”
Malaak Ayuen, deputy spokesman of the Sudan People’s Liberation Army in the South, said his forces had expected a fight-back.
“Yes we know they are moving towards Heglig,” he said. “But there is no problem … Let them come”.
World powers have urged restraint after the latest round of heavy fighting that broke out on Tuesday with waves of aerial bombardment hitting the South, whose troops seized the Heglig region from Khartoum’s army.
Southern President Salva Kiir and his Khartoum counterpart, Omar al-Bashir, have accused each other of seeking war, prompting a UN Security Council call for an immediate ceasefire.
Sudan had vowed to react with “all means” against a three-pronged attack it said was launched by South Sudanese forces.
The clashes, the worst since South Sudan won independence in July after one of Africa’s longest civil wars, have brought the two former foes the closest yet to a return to outright war.
Neither army has provided casualty figures but one Southern soldier in Bentiu said earlier: “There are so many bodies at the front line, so many dead” that it is impossible to bury them or bring them back.
When the South separated, Khartoum lost about 75 percent of its oil production and billions of dollars in revenue, leaving the Heglig area as its main producer. Its output roughly fulfilled domestic requirements.
But Tuesday’s attack caused a total production shutdown in the area, said Ahmed Haroun, governor of South Kordofan state, in which Heglig is located.
Despite international calls, Juba has refused to withdraw from Heglig unless certain conditions are met, including Khartoum’s pullout from the neighbouring Abyei region it holds and which, like Heglig, is claimed by both sides.
International arbitrators ruled three years ago that Heglig was not part of Abyei, a decision the South agreed with although it does not concede that Heglig is therefore northern.
Kiir, in a speech to parliament on Thursday, said Bashir had “announced a total war with the Republic of South Sudan.”
And Bashir said South Sudan had “chosen the path of war, implementing plans dictated by foreign parties who supported them during the civil war.”
Parliaments in the two nations have called on citizens to take up defences in case of war.
Journalists are not allowed to report independently in South Kordofan, but an AFP reporter on a government-run trip saw soldiers on Thursday lined up at the airport in the provincial capital Kadugli.
Several military trucks and three attack helicopters were seen along with a large transport aircraft.
The unrest has prompted Khartoum to pull out of African Union-led crisis talks aimed at resolving the protracted dispute with Juba over oil, border demarcation, contested areas and citizenship issues.
In January, the landlocked South shut crude production — which made up 98 percent of its income — after Khartoum began seizing Southern oil in lieu of compensation for use of its export terminal and other facilities.
This week’s clashes follow border fighting that erupted last month between the neighbours, and which each side has blamed the other for starting.
World powers, including the African Union, United Nations, United States and China, have called for restraint and voiced deep concern at the escalation of violence.
*Link for This article compiled by Roger Smith from reliable sources Abdelmoneim Abu Edris Ali, Agence France-Presse / National Post*Speaking Image - Creation of DTN News ~ Defense Technology News *This article is being posted from Toronto, Canada By DTN News ~ Defense-Technology News Contact:dtnnews@ymail.com ©COPYRIGHT (C) DTN NEWS DEFENSE-TECHNOLOGY NEWS
Posted by DEFENSE NEWS at 9:52:00 PM