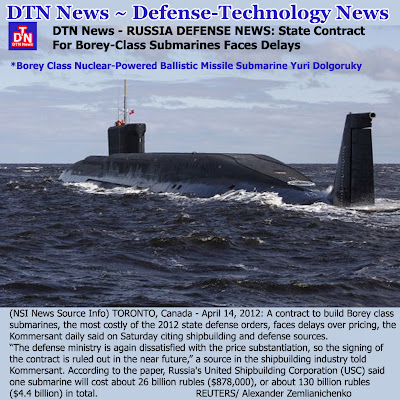 “The defense ministry is again dissatisfied with the price substantiation, so the signing of the contract is ruled out in the near future,” a source in the shipbuilding industry told Kommersant.
According to the paper, Russia's United Shipbuilding Corporation (USC) said one submarine will cost about 26 billion rubles ($878,000), or about 130 billion rubles ($4.4 billion) in total.
A defense ministry source said “the manufacturers still want to sell it at an unjustifiably high price,” while shipbuilders say such prices would barely allow them to make any profit.
In line with the revised state armament procurement program, the Russian Navy is to receive at least 10 new Borey class strategic nuclear submarines until 2020.
Dmitry Rogozin, the deputy prime minister in charge of the defense industry, said earlier this week he was uncertain that the agreement will be reached on all state defense orders for 2012 before the April 15 deadline

He said that price is still being negotiated on some objects on the list that require a production period of five-seven years, for example those intended for the Air Force and the Navy.