Defense News: DTN News - DEFENSE NEWS: The Coming War With China
*A source close to Chinese military affairs said that China has been promoting the construction of a 93,000-ton atomic-powered carrier under a plan titled the “085 Project.” The nation also has a plan to build a 48,000-ton non-nuclear-powered carrier under the so-called “089 Project,” added the source. China had so far been known to be pushing ahead with construction of a non-nuclear-powered carrier, but not an atomic-powered one.

Source: DTN News - - This article compiled by Roger Smith from reliable sources Mark Thompson | Time(NSI News Source Info) TORONTO, Canada - April 14, 2012: Is China a peaceful nation that only wants to turn out Apple iPads and iPhones? Or is the Middle Kingdom bent on attacking the U.S.? Beijing is the long, and strong, pole in the tent for the U.S. military – and they know it. China is the new Soviet Union, and perhaps it should be. 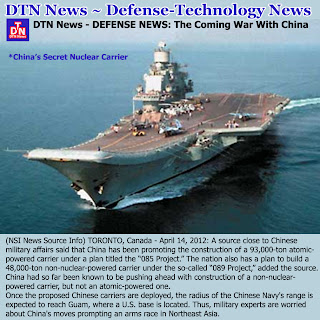 But is there a downside to view Beijing through such a lens? (Congress has created the U.S.-China Economic and Security Review Commission to track China’s growing clout [remember when the CIA was our chief threat exaggerator?] It also compels the Pentagon to report annually on Chinese military threats [remember when, for good or for ill, we counted on the Defense Intelligence Agency to keep track of such things?])
Do such assessments only create a self-fulfilling prophecy (self-fulfilling prophecy: something that allows the self-licking ice-cream cone, with apologizes to John Cameron Swayze, to keep on licking)? Perhaps not. After all, former Defense Secretary Caspar Weinberger’s multi-colored annual editions of Soviet Military Power — which portrayed the Soviet Union as a military superpower during the 1980s as the Pentagon, DIA and CIA missed its internal rot — hardly strengthened the Red Army.
Two contrary views:
In the Chinese government’s China Daily newspaper, Luo Yuan, the executive director and deputy secretary-general of the Chinese Society of Military Science, writes:

Commentary magazine’s April cover story on the other hand, is all about the coming war with China. Long-time China-watcher Bill Gertz writes:

…the U.S. military [in November took] off the gloves as part of a major war-fighting initiative to counter new Chinese weapons that might succeed in enabling its weaker forces to defeat the United States in a regional war.
The Pentagon will press the defense industry for new ideas, as one defense official put it, “about how to go into China.” Public discussion of [the new Pentagon strategy known as] Air-Sea Battle has been focused largely on operations outside China, such as anti-submarine warfare, mines and countermine warfare, and defending carriers 1,000 miles from Chinese territory. Internal military operations against China under Air Sea Battle will include special forces commando raids on missile forces and bases and, most controversial, covert action and aid to ethnic groups, such as the Uighurs in Xinjiang, anti-regime elements inside Tibet, and ethnic Inner Mongolians seeking to reunite with independent Mongolia.

It’s a safe bet that Luo Yuan’s argument is too benign (no mention of Taiwan or Tiananmen, for example). But it’s fair to suggest that Gertz’s is too menacing (no mention, for example, that nearly everything in every American Walmart is made in China).
We pay the U.S. military to survey the horizon for threats, and prepare to deal with them. China bears watching: its actions makes its neighbors uneasy, and the fate of Taiwan will have to be resolved one way or the other. But, interestingly, as each side focuses on wars that might come, they all seem to erupt in China’s backyard, not ours.
That’s probably a good thing, most Americans would say. But it sure doesn’t look that way to the Chinese.
A source close to Chinese military affairs said on March 27 that China has been promoting the construction of a 93,000-ton atomic-powered carrier under a plan titled the “085 Project.” The nation also has a plan to build a 48,000-ton non-nuclear-powered carrier under the so-called “089 Project,” added the source. China had so far been known to be pushing ahead with construction of a non-nuclear-powered carrier, but not an atomic-powered one.
Once the proposed Chinese carriers are deployed, the radius of the Chinese Navy's range is expected to reach Guam, where a U.S. base is located. Thus, military experts are worried about China's moves prompting an arms race in Northeast Asia.The dossier said the construction of the nuclear-powered carrier will be completed in 2020. China State Shipbuiling Corp's Jiangnan shipyard located on Changxing Island near Shanghai, will be responsible for its design and construction. The size is similar to former Soviet's unfinished atomic-powered carrier Ulyanovsk, the dossier states. China reportedly secretly purchased the design of Ulyanovsk from Russia. When the nuclear-powered carrier is finished, China will own an aircraft carrier which is on par with the U.S's newest of such vessels, the 97,000-ton atomic-powered USS Ronald Reagan, which recently docked at Busan Port to participate in a joint exercise between the South Korean and U.S. militaries.*Link for This article compiled by Roger Smith from reliable sources Mark Thompson | Time*Speaking Image - Creation of DTN News ~ Defense Technology News *This article is being posted from Toronto, Canada By DTN News ~ Defense-Technology News Contact:dtnnews@ymail.com ©COPYRIGHT (C) DTN NEWS DEFENSE-TECHNOLOGY NEWS
Posted by DEFENSE NEWS at 10:00:00 PM