Source: DTN News - - This article compiled by Roger Smith from reliable sources By Rhys Jones - Reuters(NSI News Source Info) TORONTO, Canada - April 4, 2012: British defence contractor BAE Systems said a contract to build 48 Typhoon aircraft in Britain for the Saudi Arabian air force had been signed but changes to the price of the deal had yet to be agreed. 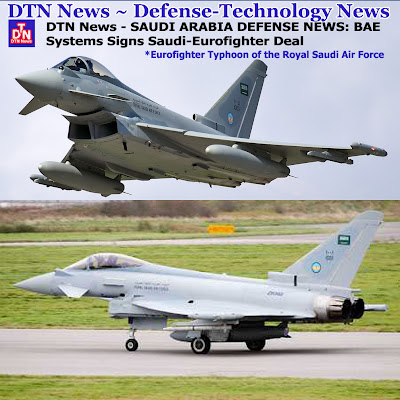 BAE had expected changes to the terms of the deal to be signed off in 2011, but it warned in January this year that talks over proposed adjustments to the final assembly of the last 48 of the 72 Typhoon aircraft would continue into 2012 and could hit 2011 profit.
The proposed changes -- such as the creation of a maintenance facility in Saudi Arabia, the addition of new capability to some aircraft and the formalisation of price changes -- could affect the price of the deal.
The Salam deal to build a total of 72 aircraft was signed in 2007 and is worth around 4.5 billion pounds ($7.21 billion), with the first squadron of 24 already delivered to the Royal Saudi Air Force (RSAF).
"The contract for the final assembly of 48 Typhoon aircraft in the UK has now been signed and final assembly has commenced at our Warton facility, discussions are ongoing with regard to the creation of a maintenance facility in Saudi Arabia and the formalisation of price variations," BAE said in an email sent to Reuters on Tuesday.
"In terms of ... conversion to Tranche 3 and formalisation of price escalation, good progress has been made with budgets approved in December 2011 through the royal decree. Negotiations on price escalation will continue into 2012."
Conversion of the jets to a Tranche 3 variant will see new missile and radar technology added to the Typhoon.
The Saudi royal decree, which was signed off at the end of 2011, releases some 1.5 billion pounds ($2.40 billion) on top of the existing Salam programme commitment for a series of enhancements, BAE said.
Saudi Arabia's Defence Minister Prince Salman bin Abdulaziz is due to meet British Prime Minister David Cameron and Defence Secretary Philip Hammond in London later on Tuesday. Saudi Arabia is a key Arab ally and a major buyer of British-made defence equipment.
Prince Salman is responsible for securing multi-billion dollar arms purchases, which have been used to cement Saudi Arabia's ties with the West. He is also seen as a possible candidate to one day rule the conservative Islamic kingdom.
Earlier this year two Western defence sources said Saudi Arabia, which placed a $29.4 billion order for new Boeing F-15 jets in late 2011, was in the early stage of talks to increase its Typhoon order by as many as 48 aircraft.
Earlier this year BAE said talks with Saudi over changes to its order for 72 Eurofighter Typhoon jets would continue into 2012. The delay hit its earnings last year, which fell 7 percent.
*Link for This article compiled by Roger Smith from reliable sources By Rhys Jones - Reuters*Speaking Image - Creation of DTN News ~ Defense Technology News *This article is being posted from Toronto, Canada By DTN News ~ Defense-Technology News Contact:dtnnews@ymail.com ©COPYRIGHT (C) DTN NEWS DEFENSE-TECHNOLOGY NEWS
Posted by DEFENSE NEWS at 6:15:00 PM