Source: DTN News - - This article compiled by Roger Smith from reliable sources Mike Blanchfield, The Canadian Press(NSI News Source Info) TORONTO, Canada - April 4, 2012: The Harper government froze spending Tuesday on the multi-billion-dollar plan to buy new jet fighters minutes after the auditor general produced a withering report accusing the Department of National Defence of keeping Parliament in the dark about spiralling problems with the F-35 purchase.
The government also announced it would take away DND's ability to buy new weapons systems and hand it to Public Works — all in an effort to shield itself from the ensuing assault in the House of Commons that followed the release of the report by new Auditor General Michael Ferguson. 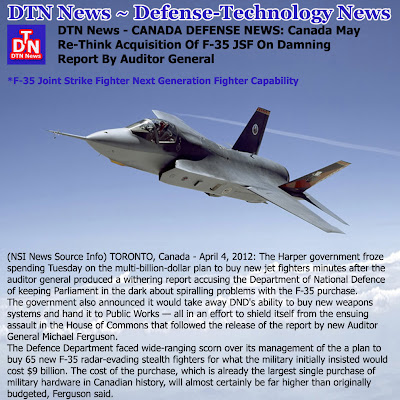