DTN News - SYRIA UNREST: Why Syria Won't Get The Libya Treatment From The West

Defense News: DTN News - SYRIA UNREST: Why Syria Won't Get The Libya Treatment From The West

Source: DTN News - - This article compiled by Roger Smith from reliable sources By Vivienne Walt - TIME(NSI News Source Info) TORONTO, Canada - March 19, 2012: One year ago, on March 19, 2011, Western leaders, alarmed by the disaster unfolding in Libya, voted in the U.N. Security Council to intervene militarily with "all necessary means," arguing that they could not stand by and watch civilians get massacred. As a result of the U.N. resolution, NATO launched a bombing campaign, led by Britain, France and the U.S., and flew about 10,000 bombing sorties over Libya, helping to obliterate Muammar Gaddafi's 42-year dictatorship in just seven months. 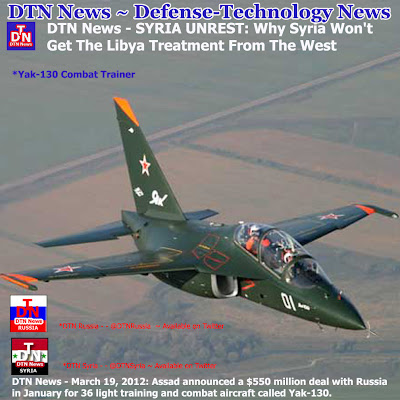 So, could it happen in Syria? Probably not, according to two reports out on Monday. Both suggest that the Western powers would face significantly bigger challenges in intervening against President Bashar Assad, both politically and militarily, than they did in Libya. Says the British military think tank Royal United Services Institute for Defence and Security Studies (RUSI) in a report marking the anniversary of the U.N. vote: "The Libya intervention took place in a singularly unique moment where the international stars, as it were, were aligned in a set of propitious circumstances."
(MORE: How a New York City–Based Activist Group Became a Player in Syria)

Unlike Gaddafi, Assad has hugely upgraded his air- and sea-attack capabilities since the revolt against him erupted a year ago, according to the Stockholm International Peace Research Institute (SIPRI), which tracks the opaque defense industry. In its yearly report on global arms transfers, also to be published on Monday, SIPRI lists billions spent by Assad on state-of-the-art Russian systems, much of which has been delivered during the past year. "This is a major upgrade," says Paul Holtom, SIPRI senior researcher on arms transfers. "Any discussions about an air attack on Syria would be more challenging than it would have been previously."

Last year, Russia delivered as many as 36 Pantsyr-SI antiaircraft missiles to Syria, according to SIPRI. Lightweight and mobile, the medium-range missiles can be mounted on the back of trucks, making them difficult for combat jets to target. In addition, the organization believes Russia has recently delivered upgraded versions of the MiG-29 combat aircraft to Syria. And it has upgraded hundreds of T-72 tanks every year since 2007, fitting them with far more modern weapons; in recent weeks, opposition activists in the besieged city of Homs filmed video footage showing T-72 tanks in action during the assault on the city.

Aside from the Pantsyr, Russia also sent Syria other modern antiaircraft missiles last year, including about 40 SA-17 Grizzly missiles and two medium-range SA-17 Buk systems, according to SIPRI. And despite the world's outrage over Assad's crackdown, Assad announced a $550 million deal with Russia in January for 36 light training and combat aircraft called Yak-130.

(PHOTOS: Alessio Romanzi's Photographs of the Syrian Civil War)
Indeed, if Gaddafi had taken delivery of the weapons, which Assad now has, he would have proved a more formidable foe against NATO forces, according to Holtom; Gaddafi's order for six Yak-130s had not been delivered by the time the Libyan revolt erupted in February last year, and he lacked new-generation antiaircraft weapons. "These are systems Gaddafi did not have," Holtom tells TIME. "He was in advance discussions about buying a number of air defense and combat aircraft from the Russians, but he never bought them."

That turned out to be a lucky break for NATO, according to RUSI. It says the Libya campaign was much more difficult than Western leaders revealed publicly at the time, making the prospect of a Syria campaign much more worrisome for politicians with the Libya experience behind them. When NATO began bombing Libya last March, Gaddafi was a much tougher enemy than the coalitions leaders, British Prime Minister David Cameron and French President Nicolas Sarkozy, had calculated. Having been argued at the U.N. that it was only to protect civilians in eastern Libya, "the operation was conceived at the lowest level and for the shortest period of time," writes RUSI director of international security studies Jonathan Eyal in the report.

Instead, it quickly morphed into an all-out war. That severely strained European militaries, which flew 90% of the attack sorties. "European stockpiles struggled to cope," writes Elizabeth Quintana, a RUSI airpower senior research fellow, adding that the U.S. ultimately had to "plug the gaps." And since Britain's Tornado and Typhoon jets were flying daily sorties over Libya, Britain's own airspace was left dangerously vulnerable. In addition, she says, European militaries were relying on aging aircraft ill equipped for the intensity and fast pace of Libya's war.

(MORE: The Gaddafi Regime Is Broken. What Will Take Its Place?)
As Libya's war dragged on for months, the strain on NATO forces grew more evident. Indeed, Cameron and Sarkozy must have breathed a sigh of relief when Libyan rebels finally killed Gaddafi on Oct. 20, ending the NATO campaign. "The armed forces were lucky the rebels toppled the Gaddafi regime when they did," Quintana writes.

Ironically, the Libyan war now makes it more difficult for Western leaders to win U.N. approval for military intervention against Assad, even though Syria looks worse than Libya did last March: U.N. officials estimate that more than 8,000 people have been killed in Syria's yearlong revolt, including many civilians in assaults against Homs, Idlib and other opposition enclaves.

This time around, however, Russia with veto powers at the U.N. Security Council has made it clear it will not ditch its longtime ally; it maintains its only naval base in the region in Syria's port of Tartus. Russian officials have said repeatedly they believe Western leaders misled them at the U.N. in March 2011 by saying NATO attacks were only to protect civilians, rather than to overthrow Gaddafi; China which also has veto powers at the Security Council has expressed similar views.

In truth, Gaddafi did critical damage to his own cause — a mistake from which Assad seems to have learned. In firebrand speeches in Tripoli last February and March, Gaddafi dared Western leaders to attack his country and scorned several overtures by them and the Arab League to negotiate a political settlement or exile deal. The RUSI report says Gaddafi "virtually invited military action upon himself. What dictator would now ever risk announcing to the world's media his intention to butcher an entire city like rats," a phrase Gaddafi used frequently to describe his opposition.

Notwithstanding the assault on Syria's opposition, there are differences: U.N. envoy Kofi Annan flew to Damascus on March 10 to discuss possible negotiations with Assad. "Gaddafi had no powerful friends and was isolated in a way that Bashar al-Assad, for example, is not," says the RUSI report. And so far those friends are standing by their man, a leader who now has other weapons at hand.