Source: DTN News - - This article compiled by Roger Smith from reliable sources by Matt Lacy - Greeley Gazette(NSI News Source Info) TORONTO, Canada - March 18, 2012: An expert on Communist China says the United States could be making a grave mistake by cutting back on defense spending while China is doing just the opposite. 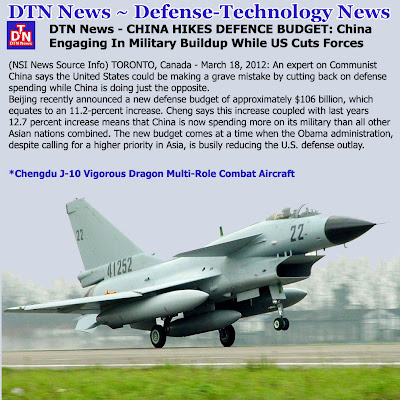 Beijing recently announced a new defense budget of approximately $106 billion, which equates to an 11.2-percent increase. Cheng says this increase coupled with last years 12.7 percent increase means that China is now spending more on its military than all other Asian nations combined. The new budget comes at a time when the Obama administration, despite calling for a higher priority in Asia, is busily reducing the U.S. defense outlay.
While many critics of defense spending in the United States say that it is larger than the majority of the world, Dean Cheng, a research fellow at the Asian studies Center with The Heritage Foundation  says there are key differences between the two militaries.
“the U.S. is a key enforcer of international norms and safety. It is the American Navy, more than any other, that keeps the world’s sea lanes safe. It is the U.S. Air Force that provides space situational awareness, including conjunction warnings, to all other space-faring nations (including China) and manages the GPS constellation to global benefit—both without charge.”
He goes on to note that by contrast China's military budget is spent almost entirely on Chinese interests. While he acknowledges that with China having the second largest economy in the world it is expected that have a substantial military, and that while the Chinese defense spending increases by themselves should not draw alarm, there are other reasons for concern.
Cheng says there are two aspects of Chinese defense priorities that could spell problems for the United States.
The first thing he says is that the Chinese are focused on countering the US military. "So they buy things like anti-ship ballistic missiles -- which really are of use only against things like American aircraft carriers, but not against, say, Somali pirates," he offers.
Cheng says another advantage the Chinese military has is that it is still more of a local military operating near China rather than maintaining a global presence like the US. This means China can put all of its resources up against only a portion of the US military.
He goes on to note the Chinese Communist Party appears to be taking a more aggressive stance not only against US interests but against its neighbors Japan, Taiwan and South Korea. The government has been making claims of sovereignty over the South and East China seas and expanding its forces opposite Taiwan.
China is not the only military United States should be concerned about. While our military is facing the possibility of close to $1 trillion in cuts over the next 10 years and a reduction of up to one third of our military force, Russia is also engaging on a military buildup.
A 10 year, $640 billion military modernization underway in Russia will include 600 new aircraft, 1000 new choppers and an additional hundred ships added to the Russian Navy including 20 submarines.
By contrast, the Pentagon has said it may be forced to engage in involuntary separations to meet troop reduction goals of 67,100 soldiers form active and reserve Army units, 15,20 from the Marine Corps, 8,600 from the Navy and 1,700 from the Air Force as part of $487 in budget cuts. If Congress is unable to reach targeted spending cuts that were a part of the congressional deal reached during last years debt ceiling debate another $500 billion could be cut from the military budget.
*Link for This article compiled by Roger Smith from reliable sources by Matt Lacy - Greeley Gazette*Speaking Image - Creation of DTN News ~ Defense Technology News *This article is being posted from Toronto, Canada By DTN News ~ Defense-Technology News Contact:dtnnews@ymail.com ©COPYRIGHT (C) DTN NEWS DEFENSE-TECHNOLOGY NEWS
Posted by DEFENSE NEWS at 1:20:00 PM