Source: DTN News - - This article compiled by Roger Smith from reliable sources AFP(NSI News Source Info) TORONTO, Canada - March 30, 2012: French police arrested about 20 suspected Islamists in dawn raids on Friday, most of them in the hometown of an extremist who was shot dead by police last week after a killing spree. 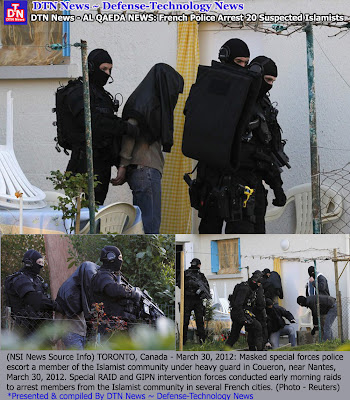 Agents from France's DCRI domestic intelligence agency swooped in to carry out the arrests, most of them in the southern city of Toulouse a day after Al-Qaeda-inspired gunman Mohamed Merah was buried there, sources close to the investigation said.
The arrests were "not directly linked" to the Merah investigation, but were aimed at dismantling Islamist networks, one source said.
Some of the arrests also targetted people in the western city of Nantes.
The arrests came a day after Merah, who was shot dead by a police sniper on March 22 at the end of a 32-hour siege at his flat in Toulouse, was buried in the city under heavy police watch.
The 23-year-old had shot dead three soldiers, and three children and a teacher at a Jewish school in a killing spree that shocked the country.
The man branded a "monster" by French leaders was laid to rest in Toulouse's Cornebarrieu cemetery after his family's homeland Algeria refused to accept the body, citing security concerns.
French authorities have charged Merah's brother Abdelkader with complicity in the attacks and said they were looking for other accomplices.
Abdelkader Merah was charged with helping his sibling steal the powerful Yamaha scooter used in the shootings and police have said they were seeking a third person who may have been involved in the theft.
Merah recorded his killings with a camera strapped to his body and police have said an accomplice may have been involved in mailing a montage of the videos to Al-Jazeera.
The video was reportedly sent to the channel's Paris bureau from outside Toulouse while Merah was already besieged in his flat by police.
President Nicolas Sarkozy said on Friday that France was shaken by the shootings, likening the trauma from the murders to that of the September 11, 2001 attacks in the United States.
"What must be understood is that the trauma of Montauban and Toulouse is profound for our country, a little -- I don't want to compare the horrors -- a little like the trauma that followed in the United States and in New York after the September 11, 2001 attacks," he told Europe 1 radio.
On Thursday France banned four Muslim preachers from entering the country to attend an Islamic conference, saying their "calls for hatred and violence" were a threat to public order.
Saudi clerics Ayed Bin Abdallah al-Qarni and Abdallah Basfar, Egyptian cleric Safwat al-Hijazi and a former mufti of Jerusalem Akrama Sabri are banned from entering France, a statement said.
"These people's positions and statements calling for hatred and violence seriously damage republican principles and, in the current context, represent a serious threat to public order," said the statement from Foreign Minister Alain Juppe and Interior Minister Claude Gueant.
*Link for This article compiled by Roger Smith from reliable sources AFP*Speaking Image - Creation of DTN News ~ Defense Technology News *This article is being posted from Toronto, Canada By DTN News ~ Defense-Technology News Contact:dtnnews@ymail.com ©COPYRIGHT (C) DTN NEWS DEFENSE-TECHNOLOGY NEWS
Posted by DEFENSE NEWS at 5:58:00 AM