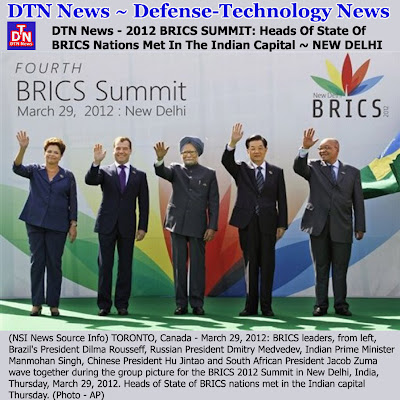 This would seek to reduce the demand for fully convertible currencies for trade transactions among BRICS countries — Brazil, Russia, India, China and South Africa. The leaders of these five rapidly emerging economies also agreed to explore ways to establish a development bank for financing projects in these, as well as other developing countries.
Addressing the media after the conclusion of the summit, Prime Minister Manmohan Singh said, “The agreement signed today by development banks of BRICS countries will boost trade among us by offering credit in our local currencies.”

A ‘multilateral letter of credit confirmation facility agreement’ was signed among the five participating banks — Brazil’s Banco Nacional de Desenvolvimento Economic e Social, Russia’s State Corporation Bank for Development and Foreign Economic Affairs (Vnesheconombank), Export-Import Bank of India, China Development Bank Corporation and Development Bank of Southern Africa.
“We have agreed to examine in greater detail a proposal to set up a BRICS-led South-South Development Bank, funded and managed by the BRICS and other developing countries,” Singh said, adding the five BRICS countries had directed their respective finance ministers to set up a joint working group for an in-depth analysis of the proposal.

The joint Delhi Declaration, issued after the meeting, underscored the concerns of the BRICS countries — “the slow pace of quota and governance reforms in the IMF(International Monetary Fund.” The leaders agreed on giving more powers in the form of greater voting rights to developing economies. The leaders said the process of selecting candidates for the top posts in the World Bank or the IMF should be an “open and merit-based” one. “The new World Bank leadership must commit to transform the Bank into a multilateral institution that truly reflects the vision of all its members, including the governance structure that reflects current economic and political reality. Moreover, the nature of the Bank must shift from an institution that essentially mediates North-South cooperation to an institution that promotes equal partnership with all countries as a way to deal with development issues and to overcome an outdated donor-recipient dichotomy,” the leaders stated.

Earlier, Prime Minister Singh had highlighted the need to prioritise easier business visa norms to take full advantage of such a group. “We should promote greater interaction amongst our business communities. Issues such as easier business visas must be prioritised. As large trading countries, BRICS have a strong interest in removing barriers to trade and investment flows and avoiding protectionist measures,” he said.
The leaders said volatility in commodity prices posed risks, especially in food and energy. They called for improved regulation of the derivatives market to avoid destabilising impacts on food and energy supplies.

They said the situation in Iran should not be allowed to escalate into a full-fledged conflict and expressed concern on the human rights violations in Syria.
Related Stories  *Link for This article compiled by Roger Smith from reliable sources Nayanima Basu / New Delhi Mar 30, 2012, 00:26 IST - Business Standard*Speaking Image - Creation of DTN News ~ Defense Technology News *This article is being posted from Toronto, Canada By DTN News ~ Defense-Technology News Contact:dtnnews@ymail.com ©COPYRIGHT (C) DTN NEWS DEFENSE-TECHNOLOGY NEWS
Posted by DEFENSE NEWS at 9:45:00 PM