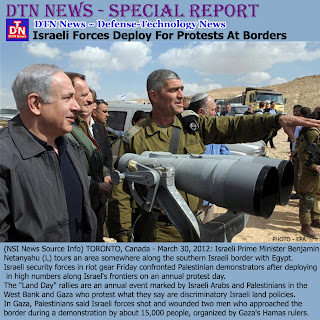 In Gaza, Palestinians said Israeli forces shot and wounded two men who approached the border during a demonstration by about 15,000 people, organized by Gaza's Hamas rulers. The Israeli military said soldiers shot and wounded one protester Elsewhere, it were calm.The "Land Day" rallies are an annual event marked by Israeli Arabs and Palestinians in the West Bank and Gaza who protest what they say are discriminatory Israeli land policies.
Supporters in neighboring Arab countries also planned marches near the Israeli frontier, but organizers said they would keep protesters away from the borders.
Last year, demonstrators from Lebanon and Syria tried twice to break across the borders into Israel, setting off clashes with Israeli troops in which at least 38 people were killed.
In southern Lebanon Friday, more than 3,000 Lebanese and Palestinians gathered outside the Crusader-built Beaufort castle 15 kilometers (9 miles) from Israel. Lebanese security forces kept them from moving any closer to the border. 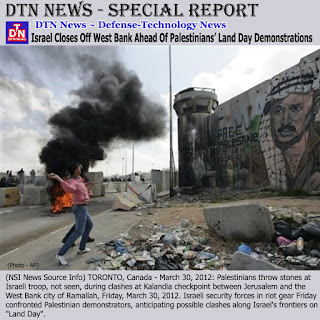 Sobhiyeh Mizari, 70, said she always taught her 12 children "never to forget Palestine."
"We will liberate our land against the will of Israel and its backers," said Mizari, who said her husband was killed in Israeli shelling of Lebanon in 1978.
Security forces were preparing for demonstrations in northern Israel, where a large portion of Israel's Arab minority lives.
Several dozen Palestinians who live in east Jerusalem waved their national flag outside Jerusalem's walled Old City. "One, one homeland!" they chanted.
Palestinians were banned from entering from the West Bank except for medical emergencies, and police barred Palestinian men under 40 from praying at a volatile Jerusalem holy site, citing security concerns. 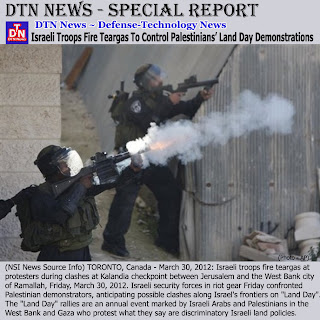 The demonstrators performed their communal Muslim Friday prayers where they stood, praying on their flags instead of traditional mats.
They were surrounded by what appeared to be an equal number of Israeli security forces.
"Israel has no trouble with peaceful protest and respects the rights of people to demonstrate peacefully," said government spokesman Mark Regev.
Many Palestinians, energised by Arab Spring uprisings that have overturned decades-old authoritarian regimes, see massive, coordinated marches as one of the most effective strategies to draw attention to their cause.
"After the Arab revolutions, there's awareness of the importance of popular participation," said Arab activist Jafar Farah. "This has rattled the Arab regimes, and now it's frightening the Israeli government." 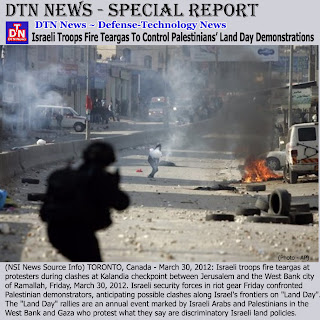