Source: DTN News - - This article compiled by Roger Smith from reliable sources Pakistan Today
(NSI News Source Info) KARACHI, Pakistan - April 7, 2011:
Twenty-three-year-old Zain*, a Catholic Christian, was admitted to the emergency ward of the Civil Hospital Karachi after he was shot and wounded as a passer-by in a crossfire. 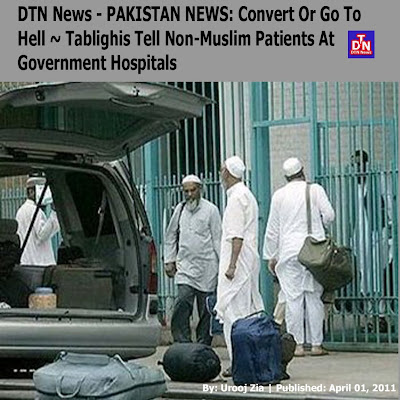 While his worried parents and sister stood around waiting for the doctor’s verdict, men in green turbans and high shalwars swooped down on Zain. “Brother, you must denounce your infidel ways. Kalma parhein (recite the Kalma),” they told the young man who was barely conscious and obviously in immense pain. “Become a Muslim, and god will forgive you all your transgressions against him. Die a Muslim!” Zain’s 17-year-old sister pleaded with them once to leave the family alone. “My brother is in pain. Please, let us take care of him,” she said. In response, one of the men turned around and gruffly told her to shut up. “Do not interfere in god’s work,” she was told.
Such scenes are no longer an anomaly at government hospitals in Karachi: men from various religious factions – the Tablighi Jamaat in particular – stalk the hallways of emergency wards, hoping to earn ‘savaab’ by converting non-Muslims on their deathbeds. In their quest for supposed divine rewards, they ignore the pleas of the families to be left alone with their loved one, as well as any pain that the patient might be in. Zain’s parents pulled their aside. “We know the consequences of interfering,” his father, who works as a mechanic, said quietly after the men had left when Zain, who had lost consciousness by then, did not respond.
“These people are like vultures; they do this to everyone. If we try to stop them, they will accuse us of maybe insulting their religion. We don’t want to be charged with blasphemy. It will be our word against theirs. Who will listen to us?” he asked. Zain wasn’t the only victim. The group of green-turbaned men went around to every bed, asking attendants of patients if they were Muslim. If they replied in the affirmative, they were asked to recite the Kalima to ‘prove’ it. It must be noted that these attendants were already harassed – most of the patients in the ward were in critical condition; they were either victims of roadside or household accidents or had gunshot wounds that needed attention.
Nurses in the area, meanwhile, pretended to look the other way. “We’re already understaffed and have too much to deal with. We can’t handle this additional headache. Let them do what they want. The patients’ attendants can deal with them,” they said.
Similar scenes are repeated regularly at every government-run hospital in the city. While security at these organisations is minimal, even the guards that are present don’t try to stop the evangelists. “Who are we to interfere in the work of god,” Saleem, a guard on duty outside the emergency ward at the Jinnah Postgraduate Medical Centre claimed, shrugging helplessly. “If someone converts to Islam this way, we will get Savaab too. These men help the patients and their families get spiritual peace.”
“We wish they’d leave us alone,” Zain’s father maintained. “If my son wanted to convert, he would have done so on his own. What’s the point of harassing someone who is obviously already in pain? Whose god would allow that?”
* Name changed to protect privacy
Pakistan Related News;

CIA network in Pakistan will worsen shaky ties, US told

ISLAMABAD - Pakistan on Thursday spelt out serious concerns over the current state of the relationship between the two major allies in the US-led anti-terrorism campaign with the presence of a large network of CIA operatives on Pakistani soil at the top of complaints’ list.Pakistani authorities also warned that a delay in action on the part of Washington to address Islamabad’s concerns could jeopardise the cooperation between the two countries in the fight against terrorism. The

LAHORE - An Indian national, who was held by Pakistani intelligence agencies and charged with spying and sentenced to life imprisonment…Read full story »

QUETTA - A senior police officer survived a suicide explosion outside his house on Thursday morning that injured 13 people, including three…Read full story »

Why were rules relaxed in Reko Diq lease, asks CJP

Ministry ‘too small a price’ asked by MQM