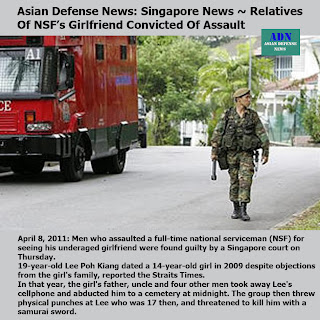 19-year-old Lee Poh Kiang dated a 14-year-old girl in 2009 despite objections from the girl's family, reported the Straits Times.

In that year, the girl's father, uncle and four other men took away Lee's cellphone and abducted him to a cemetery at midnight. The group then threw physical punches at Lee who was 17 then, and threatened to kill him with asamurai sword.

Before letting Lee go, the girl's father, 43, and uncle, 38, warned him to stay away from his daughter.

Lee reported the assault incident to the police. When the girl's father and uncle found about the charge, they were said to have had taken him to a karaoke lounge and had tried to persuade him to change his police statements.

After a hearing lasting three weeks, District Judge Sarjit Singh convicted the men on Thursday of being part of an unlawful assembly armed with deadly weapons that hurt and abducted Lee.

The men will be sentenced on 21 April. Their accomplices, who are unidentified, are still at large.