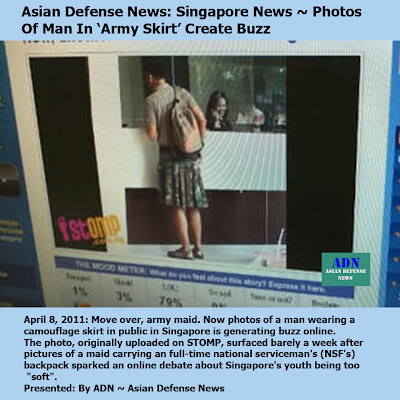 The eyewitness, who gave his name as Norman, took the photo. He said, "I saw him at Parkway Parade shopping centre, calmly waiting in line at a money changer, despite the stares he was getting from people around him."

"The skirt was in the style of a Scotsman's kilt, and had three of the original-style pockets on it, one at the side and two in the front. It looked quite professionally-made."

Describing the man as appearing to be in his mid-forties, he added that the skirt looked like it was made from an old Army No. 4 uniform, and even had button-on pockets sewn onto it.

While some netizens have labelled him a 'softie', others think we need to lighten up.

23-year-old undergraduate Royston Lin added, "It's strange to see a man walking around in a skirt in public. But I guess that's in the context of Singapore's social norms. In Scotland it would be perfectly acceptable. Perhaps he should be mindful of the culture he's in."

Others like 21-year-old student Nuraliza H. said, "I think we need to lighten up. He's just experimenting and having fun. After all, I've seen male runway models wearing kilts too."

Fashion-forward, or plain bizarre? You be the judge.