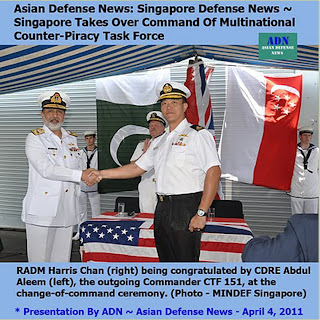 The ceremony was witnessed by Commander Combined Maritime Forces Vice Admiral (VADM) Mark Fox and attended by Singapore's Chief of Navy Rear-Admiral (RADM) Ng Chee Peng. This is the second time Singapore has commanded CTF 151.
RADM Harris Chan from the Republic of Singapore Navy (RSN) will lead the CTF 151 command team to coordinate counter-piracy operations by CTF 151 in deterring and disrupting piracy in the Gulf of Aden (GoA) over the next three months. The command team, comprising 25 SAF personnel, will operate from the US Navy destroyer USS Mason and will work closely with task forces from the North Atlantic Treaty Organisation and the European Union as well as with navies from other countries assigned to protect national vessels operating in GoA. Joining the SAF command team are five officers from Indonesia, New Zealand, the Republic of Korea and Saudi Arabia.

After taking over command from Commodore Abdul Aleem from the Pakistan Navy, RADM Chan said, "We are honoured to take over command of CTF 151 for the second time at the invitation of the Combined Maritime Forces. The Gulf of Aden remains a key sea lane that depends on international cooperation to keep it safe for everyone's use. My command team has spent the last few months preparing, planning and training for this mission. We are committed and focused on our mission to deter and disrupt piracy in the Gulf of Aden."

The Singapore Armed Forces (SAF) has been deploying assets to the Gulf of Aden since April 2009. The SAF previously commanded CTF 151 from January to April 2010 and also deployed two Task Groups, each comprising a Landing Ship Tank and two helicopters from April to July 2009 and June to October 2010. The SAF will be deploying a Fokker-50 Maritime Patrol Aircraft to perform maritime air surveillance in the Gulf of Aden from April to July 2011.