Saudi security forces came out in strength in Riyadh on a "day of rage" organised by pro-democracy campaigners who managed only small demonstrations in the eastern provinces. 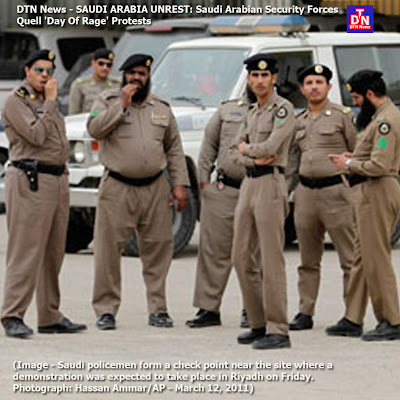 Expectations that the unrest sweeping the Arab world in the last few weeks would spread to its most conservative kingdom appeared to have been dashed by pre-emptive security measures and stern official warnings against any protests.

Far larger demonstrations rocked Yemen, where tens of thousands of pro and anti-government protesters took to the streets as President Ali Abdullah Saleh struggled to maintain his grip.

Clashes broke out in the nearby island state of Bahrain, where Shia protesters were confronted by riot police guarding the royal court in Manama. Demonstrations were also held in Kuwait by stateless people demanding their rights.

The calm in the Saudi capital may have been achieved partly by an incident on Thursday in the eastern city of al-Qatif, where police shot and wounded at least two protesters. Unconfirmed reports described trouble there again.

Protesters rallied in Hofuf, close to the eastern Ghawar oil field and major refinery installations. The city has seen scattered protests by Shias who complain of discrimination by the Sunni majority.

Security in Riyadh was high-profile and intense, with helicopters hovering overhead and police checks on cars and individuals heading for mosques, where protests were expected after prayers.

"Police cruisers were given orders to pull over any car," tweeted Mohammed al-Qahtani, president of the Saudi Civil and Political Rights Association. "I saw several cars being searched by officers, and they checked IDs."

Disappointed activists counted more policemen and journalists than demonstrators. "Where were all these policemen and helicopters when Jeddah was drowning?" asked one Saudi — a sardonic reference to the floods that devastated the Red Sea coastal city twice in the last two years and fuelled anger and resentment at government incompetence.

Activists had used a Facebook page to call for protests but many reformist Saudis said they did not know who the organisers were and raised concerns of a possible provocation by the secret police in a country where demonstrations are rare.

Rumours were rife in Riyadh, with anonymous text messages carrying dire warnings of huge fines, loss of nationality and expulsion from the country. "The messages are not coming from official channels, and are obviously scare tactics employed to discourage large numbers from showing up and adding to the tensions," one resident told the Guardian.

Last month King Abdullah, who is 87, sought to defuse opposition demands for change by unveiling an unprecedented package worth about $37bn (£23bn) to pay for unemployment benefits, education and housing subsidies the day after he returned from three months of medical treatment in the US and Morocco.

But critics said he was resorting to a familiar tactic of throwing money at a problem and not addressing its root causes — a lack of significant political reform.

Since then the streets of Riyadh have been festooned with flags and large green posters of a smiling King Abdullah welcoming him home.

"If you are well, we are all well," one read. "Welcome king of humanity," said another. Before a soccer match on Thursday, a message was circulated among fans urging them not to wear their team's colours but the green of the Saudi national flag.

For some Middle East analysts the extent of unrest in Saudi Arabia has been seen as a possible indicator of whether the popular unrest across the region will begin to ebb or continue to intensify. But a low turnout in protests may lead the king and his advisers to conclude that internal pressure for reform can be ignored.

A special correspondent in Riyadh contributed to this report

ALL THE MARKETS ARE WELL SUPPLIED WITH OIL EXXONMOBIL

Moneycontrol.com - ‎4 hours ago‎
The geopolitical tensions in the Middle East are on the edge of spreading to Saudi Arabia, the largest provider of the world's oil consumption. Does that mean that the oil prices are yet to touch another high? In an interview with CNBC's Erin Burnett, ...
OPEC Production Compliance Falls to 40% on Saudi Arabia Increase Bloomberg
If Unrest Hits Saudi Arabia, Oil May Jump To $200 Financial Feed
NYMEX-Crude down on Japan quake, Saudi Arabia eyed Reuters Africa
Wall Street Journal (blog)
all 6,305 news articles »
XOM

TheChronicleHerald.ca - David Jackson - ‎1 hour ago‎
The Dalhousie University medical school is selling spaces to Saudi Arabia as a way to generate money to make up for underfunding, the school's dean says. The 10 first-year seats became available as a result of a ...
USA Today

Salon (blog) - ‎1 hour ago‎
When the future history of Saudi Arabia is written, perhaps a significant chapter will start with the date of March 11, 2011. That is the date that Facebook and Twitter users have called for demonstrations in the capital city of Riyadh and other places ...
Why Saudi Arabia is stable amid the Mideast unrest Washington Post
Saudi Arabia warns on foreign interference in domestic affairs DigitalJournal.com
Driving Miss Saudi Toronto Sun (blog)
Arab News - Wall Street Pit
all 102 news articles »

Forbes - ‎18 hours ago‎
Gulf nations including Saudi Arabia and the United Arab Emirates (UAE) have withdrawn any sort of support for Muammar al-Gadhafi calling his regime “illegitimate” and condoning its use of organized violence against a civilian population. ...
Video: Libya: Rebel leader calls on key tribe for support

Email this story
Center for Research on Globalization

Center for Research on Globalization - ‎13 hours ago‎
by Joseph Santolan About 20 Filipino contract workers staged a protest outside of the Philippine Overseas Labor Office (POLO) in Riyadh, Saudi Arabia on January 22. They were part of a group of 57 workers unable to depart from Saudi Arabia and return ...
Saudi Filipinos panic buying Inquirer.net
• Philippines Urged to Protect OFWs as Protests Spread in Middle East Bulatlat
all 6 news articles »

NPR (blog) - Carrie Johnson, Margot Williams - ‎14 hours ago‎
A federal judge in Chicago will allow a former inmate in a restrictive prison unit designed for terrorists and other prisoners who authorities say require constant supervision to travel to Saudi Arabia for up to a month to visit his ...
Globe and Mail

FAR LARGER THAN THOSE OF SAUDI ARABIA, CHINA, AND CANADA COMBINED