Flight cancellations by All Nippon Airways Co. (9202.TO) and Japan Airlines Corp. continued Saturday, after a massive earthquake struck northeast Japan, even as operations at Tokyo's main airports returned to normal with most other Asian carriers resuming scheduled flights. 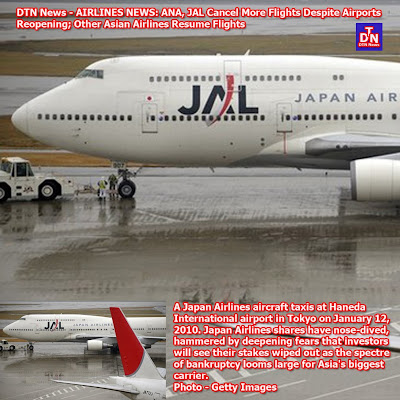 Japan's air carriers cancelled flights due to difficulties with connecting flights to airports in quake-hit areas, and due to interruptions of ground transport to Tokyo's international airports of Narita and Haneda.

Separately, the transport ministry said the total number of flight cancellations into and out of Japan by domestic and foreign carriers totaled 400 Saturday.

Several hundreds of international flights had already been cancelled Friday, grounding thousands of passengers following the massive 8.9-magnitude quake that struck off the northeast of Japan, temporarily halting operations at Tokyo's main airports and disrupting ground transportation, communications and power supply in Tokyo and around the quake-torn areas.

The quake, Japan's strongest on record, triggered a devastating tsunami and claimed at least 433 lives with 784 people still missing, according to Kyodo News.

Elsewhere in Asia, most airlines were resuming flights as normal. Cathay Pacific Airways Ltd. (0293.HK) said in a statement it would resume six scheduled flights to and from Narita and Haneda Saturday afternoon.

Singapore Airlines Ltd. (C6L.SG) said it had canceled one flight that was to take off from Tokyo's Haneda Airport for Singapore shortly after midnight Saturday. Six flights either originating from Tokyo or flying into one of the city's two airports are flying on schedule on Saturday while another one had been rescheduled.

Asiana Airlines Inc. (020560.SE) has also resumed its regular flights to Narita and Haneda airports from Saturday, though its flights to Ibaraki and Sendai airports have been cancelled.

Thai Airways International PCL (THAI.TH) said it resumed Saturday flights from Bangkok to Narita and Haneda airports and from Narita to Phuket.

Thai Airways said it will waive all fees for passengers changing flights or seeking ticket refunds for the Thailand-Japan route during March 11-12.

The Indonesian flag carrier flies daily to Tokyo from Jakarta and Denpasar, once a day to Osaka from Denpasar and three times a week to Nagoya from Denpasar.

Air New Zealand Ltd. (AIR.NZ) said it has resumed all flights in to Tokyo. Air New Zealand spokesman Mark Street said that one flight had to be re-routed Friday night into Osaka but normal operations had now resumed.

-Joanne Chiu in Hong Kong, Gaurav Raghuvanshi in Singapore, Leigh Murray in Bangkok, Jieun Shin in Seoul, I Made Sentana in Jakarta and Lucy Cramer in Wellington contributed to this article.