DTN News - LIBYA UPRISING: Europe And US Step Up Pressure On Gaddafi To Go

Defense News: DTN News - LIBYA UPRISING: Europe And US Step Up Pressure On Gaddafi To Go

Source: DTN News - - This article compiled by Roger Smith from reliable sources By Michael Georgy and James Mackenzie - Reuters
(NSI News Source Info)
TRIPOLI/BRUSSELS
- March 12, 2011: Europe and the United States stepped up diplomatic pressure on Muammar Gaddafi to quit, while on the ground his forces used their superior strength to press their advantage against rebels. 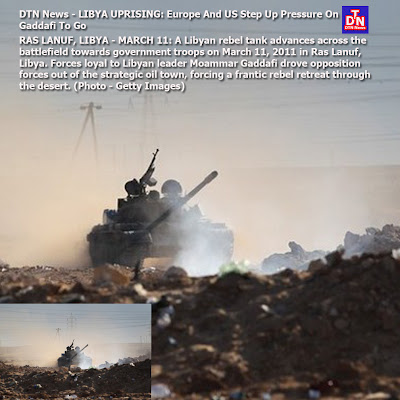 President Barack Obama said on Friday the United States and its allies were "tightening the noose" around Gaddafi and European Union leaders meeting in Brussels said they would consider all options to force the Libyan leader to step down.

However, the 27 leaders meeting in Brussels stopped short of endorsing air strikes, a no-fly zone or other military-backed means to achieve that goal. Libyan rebels said their three-week-old insurrection could fail without a no-fly zone.

The summit sidestepped a British and French initiative for a U.N. Security Council resolution that would authorise a no-fly zone.

They also would not back French President Nicolas Sarkozy's call to follow his lead and recognise the National Libyan Council as the country's legitimate authority, or his call for "defensive" air strikes against Gaddafi's forces if they used chemical weapons or warplanes against civilians.

Obama, accused by critics of reacting too slowly, told a news conference he believed international sanctions, an arms embargo and other measures already in place were having an impact but also said a no-fly zone remained an option.

"Across the board we are slowly tightening the noose on Gaddafi. He is more and more isolated internationally," he said. "I have not taken any options off the table."

Soon after he spoke, the U.S. Treasury Department said it had extended a freeze on assets to Gaddafi's wife, four of his sons and four senior officials in his government.

Gaddafi's forces, with air supremacy and a big advantage in tanks, appeared to be maintaining the momentum on the ground.

The sound of explosions and small arms fire came from the oil port of Ras Lanuf on Friday as government troops landed from the sea, backed by tanks and air power.

Rebels had advanced to the town of Bin Jawad about 60 km (38 miles) west of Ras Lanuf a week ago, but have been driven back across the strip of desert and scrub. Though out-gunned, they have kept up stiff resistance.

"Ras Lanuf is a ghost town. There are skirmishes between rebels and Gaddafi forces going back and forth," said rebel captain Mustafa al-Agoury, adding that rebels were positioned on the east and Gaddafi's forces on the west of the town.

Neither side had full control. Libyan state television said the town was cleared of "armed gangs" opposed to Gaddafi and a spokesman for the rebel movement, Hamid al-Hasi, told Al Arabiya that Ras Lanuf was back in rebel hands.

Many rebels were angry at international inaction.

"Where is the West? How are they helping? What are they doing," shouted one angry fighter.

In Tripoli, Libyan security forces used teargas and fired in the air to disperse worshippers near a mosque before they could even attempt any protest, a Libyan man said, citing witnesses.

It was impossible to verify reports about what was happening in the Tajoura district of Tripoli because foreign journalists were prevented from reporting from the area and local anti-Gaddafi activists were not answering phone calls.

The revolt in Zawiyah, 50 km (30 miles) west of Tripoli and held by rebels for days against fierce attacks, appeared to have been crushed.

A hotel on the square that had been the rebel command centre stood burned out, now guarded by Gaddafi militiamen. Facades not covered by large cloths were pockmarked by bullets from days of battles around the space the rebels called Martyrs' Square.

"There were bad guys inside. There were 35-40 guys there yesterday with Kalashnikovs and big guns," said Waleed, one militiaman, pointing towards the building's ruined facade.

"We cannot live without Gaddafi. He is the king of Africa, not just Libya."

The only town holding out in western Libya was Misrata, about 200 km (125 miles) east of Tripoli. It was calm on Friday, but rebels said they were expecting an attack in the near future.

"We ask the international community to shoulder their responsibilities," Mustafa Abdel-Jalil, head of the rebels' National Libyan Council, told the BBC.

"The Libyans are being cleansed by Gaddafi's air force. We asked for a no-fly zone to be imposed from day one, we also want a sea embargo," he said.

About 15,000 worshippers gathered outside the courthouse that has become the council's headquarters in the rebel stronghold of Benghazi.

"Help us to become a democratic country," said one banner strung between lampposts and written in English and Arabic.

The Arab League will discuss the no-fly zone and the idea of extending formal recognition to the rebels at a meeting on Saturday, but experts said divisions among them will likely preclude agreement, disappointing the EU which had been looking to the grouping to help guide their next steps.

BBC News - ‎54 minutes ago‎
Intense fighting is reported in the Libyan town of Ras Lanuf between opposition fighters and forces loyal to leader Colonel Gaddafi. Government warplanes bombed a refinery and a rebel checkpoint near the northern oil town, east of Tripoli. ...
Video: Inside Story - Has Gaddafi lost the diplomatic battle for Libya?

US TO NAME A LIAISON TO LIBYAN REBELS

Email this story
Globe and Mail

CANADIAN UN PICK FOR LIBYA PROBE AFTER HE WAS GADHAFI PICK

VENEZUELA'S CHAVEZ SAYS US, NATO PREPARING FOR WAR INLIBYA, WARNS IT WOULD BE ...

The Canadian Press - Jorge Rueda - ‎7 hours ago‎
CARACAS, Venezuela — Venezuelan President Hugo Chavez warned Friday that it would be madness for the United States and its NATO allies to go to war in Libya to try to topple Moammar Gadhafi. Chavez, a friend and ally of Gadhafi, criticized President ...

Inquirer.net - Dj Yap - ‎6 hours ago‎
MANILA, Philippines—Hundreds of Filipino nurses and medical staff who have opted to stay behind in strife-torn Libya are winning the hearts of the locals and improving the reputation of the Philippines in Arab countries, ...
DFA spokesman: 'Hundreds' of Pinay nurses to stay in Libya GMANews.TV
all 64 news articles »

IN LIBYA REVOLT, YOUTH WILL SERVE, OR AT LEAST TRY

New York Times - Kareem Fahim - ‎8 hours ago‎
Ali Abdul Karim, who claims to be 14, in Ras Lanuf, Libya, after he hitched a ride with fighters from his home in Benghazi. By KAREEM FAHIM RAS LANUF, Libya — The bullet the boy held was bigger than his hand. He said he was 15, but then admitted he ...
Under fire BBC News
Libya: Fear of Collapse New Yorker (blog)
Slideshow - Libya at War PBS
Reuters Africa - WDEF News 12
all 31 news articles »