Source: DTN News - - This article compiled by Roger Smith from reliable sources Sergei Balmasov Pravda.Ru
(NSI News Source Info) TEHRAN, Iran - March 29, 2011: To suppress the revolution in Bahrain, the local king called on local troops from the neighboring Saudi Arabia. The British media that has its sources in the Bahraini royal family talked about such a possibility earlier. In particular, this was reported by the authoritative publication The Guardian. 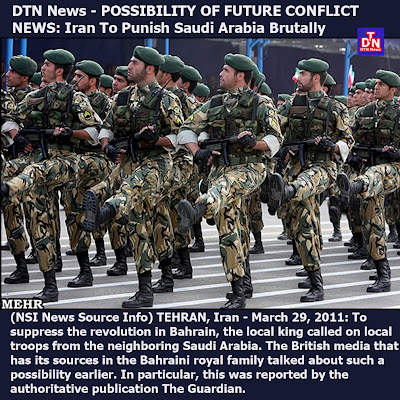 Such a request was received by Riyadh on March 14, and he responded immediately. As stated earlier by the representatives of the ruling Saudi dynasty, they are ready to assist "the ruler and the people of the friendly country of Bahrain." Fortunately, it is allowed by the existing agreements on mutual support between the two countries, members of the Council on Cooperation in the Persian Gulf.

Yet, it is difficult to say who is considered the "people" by Saudi authorities since the anti-government rallies are attended not only by the representatives of the Shiite majority (70 percent of the population of Bahrain), but rather numerous representatives of the Left (including the Communists) from among the Sunnis.

The rallies in Bahrain have been ongoing for over a month. The Shiite majority actively opposes the oppression by the ruling Sunni minority, which includes Crown Prince Salman bin Hamad Al-Khalifa, who is especially zealous in insisting on foreign intervention.

The authorities of Bahrain demonstrate the inability to cope with the mass national protests involving tens of thousands of people. Not only men but also women participate in the rallies.

It is remarkable that the attempts of the authorities to calm the heat of protests by one-off cash handouts have failed. Then the king decided to influence those dissatisfied exclusively with a stick. The enforcement actions against the opposition gave only a temporary effect. On February 17, police with the assistance of the military defeated the opposition tent camp in the capital Manama. The opposition claimed that dozens of their supporters have been killed. However, the repressions could not calm down the popular discontent.

A few days ago the protest rallies in Bahrain have reached a new level. Fierce clashes have started between Sunnis and Shiites in educational institutions, including universities. The opposition has blocked the roads in the heart of Manama. Approximately a hundred opposition members and 14 police officers were injured in the ensuing clashes.

The situation for the ruling dynasty of Bahrain is complicated by the fact that the country has numerous opponents of the government from among the Sunnis, particularly among immigrant guest workers who conduct their protests, blocking the roads. Communist sentiments are particularly strong among them.

Every day it gets more difficult for the forces loyal to the king to deal with the rallies, and the cry for help to Saudi Arabia can be viewed as inability to deal with popular unrest.

Two weeks ago the media published reports about Saudi troops with 30 tanks entering Bahrain. However, there was no information that the troops were there to help the Bahraini king to subdue the popular uprising. In fact, the Saudi demonstrated support for the ruling regime in Manama.

Nonetheless, back on March 1 one of the leaders of the Shiite opposition, the head of the Haq movement Hasan Mushayma has threatened to seek help from Iran if the Saudi troops intervene in the affairs of Bahrain.

Two weeks later he repeated his promise. According to him, the Iranian army will have the right to support the Bahraini opposition if the Saudi troops suppress the people. 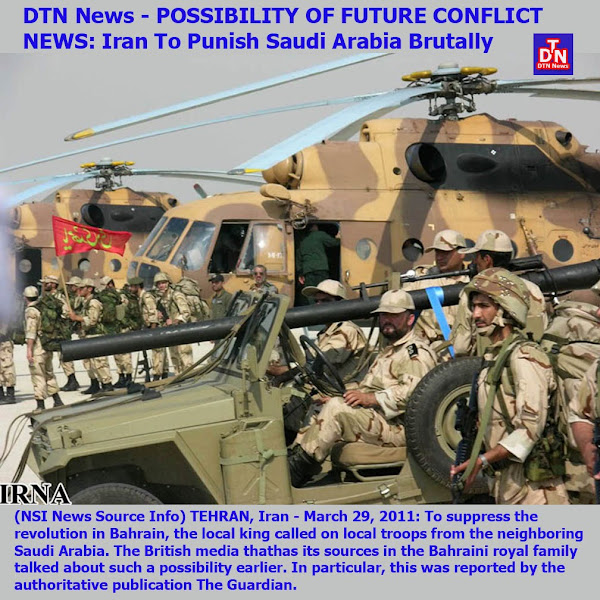 How serious are the words of Hassan Mushayma? On the one hand, the suppression of the co-religionists Shia by the regimes of the Persian Gulf in Tehran has always been perceived painfully. Particularly in Bahrain which has been virtually stolen from Iran by the British colonialists. On the other hand, will they deal with Riyadh who is under the protectorate of the U.S.?

To answer this question, we must consider that, according to the Bahraini authorities, Hassan Mushayma is "being fed from the hands of Iran." Maybe this statement is too intense. However, it is undeniable that the man who was intimidated by Manama took refuge in the Islamic Republic and had been living on its territory for a long time. His warning does not seem to be unfounded.

This is especially true because Iran has a great capacity to provide power impact on Saudi Arabia, including inflicting force on Riyadh. The most important instrument of Teheran is hundreds of thousands of rockets of small and medium-range that, if necessary, can create serious problems for oil production in Riyadh.

Perhaps, this is the reason why the CEO of the Center for the Study of Modern Iran Rajab Safarov said in an interview with Pravda.ru that "Iran would severely punish Saudi Arabia for a possible intervention in Bahrain. The Saudi and other monarchical regimes themselves are doing everything possible to ensure that popular unrest takes place.

First, people are tired of the oppressive power of individual clans represented by narrowly focused groups of people who do not express the interests of the people. Second, during its many years of ruling, the government monarchies of the Gulf have pushed away all the rest from power. This generates a righteous indignation of the active part of the population because they want to fight for power, influence and participate in decision making. Third, they are unhappy with an extremely high level of corruption in these countries generated by irremovable despotic power. Fourth, they protest against the dominance of the Americans imposing their culture and lifestyle that Islam does not accept by its nature. After all, the United States promote the cult of money and commercialism, cruelty and violence, permissiveness and complete debauchery, etc., everything that leads to the degradation of society.

Virtually and effectively the monarchical regimes of the Persian Gulf are the puppets and faithful servants of America and their vassals in the region. At one time one of these servants was the Shah of Iran, who was overthrown by the awakened people. The same thing is happening now in the Persian Gulf.

The tension surrounding Bahrain is pumped up by the West who clung to a recent statement by the official Iran that Bahraini territory at one time was one of the Iranian provinces. It served as a starting point for the absurd accusations against Tehran that it is supposedly conducting subversive activities. As for Hassan Mushayma, he indeed visited Iran. Yet, this does not mean that the latter is trying to destabilize the situation in Bahrain and the region as a whole. This is wrong and nobody can prove otherwise. Iran has never interfered in the internal affairs of other countries such as Bahrain.

However, this does not mean that he will sit idly if the Saudi troops start suppressing the uprisings in Manama. Tehran would perceive this as a rude forceful intervention in the affairs of Bahrain and the awakening of Islam. If the people of Bahrain ask for help, Iran may well be involved in protecting the region's peoples, including the people of Bahrain, repressed by the reactionaries from Saudi Arabia, who ask for permission from the U.S. for their every sneeze and that would never dare to interfere without their consent and assistance."