- March 29, 2011:
Despite being heavily in debt, Greece keeps spending on arms. A probe into its accounts has led to an investigation into submarine deals with Germany and alleged corruption in the grey areas of the EU's defense sector.

Greek financial investigators have ascertained that more than $140 million in bribes were paid by a German submarine maker to local politicians and officials to facilitate a lucrative defense contract.

The deal focused on the purchase of four submarines, a $1.5 billion controversial contract that had drawn heated political debate.

Sources told the Greek Kathimerini newspaper that "numerous bribes were paid before the contract was signed," alleging that some of the ways in which the final bill was inflated involved requests by the Greek navy and Defense Ministry for extra equipment on the submarines.

The first submarine, named Papanikolis, was commissioned for development by Howaldtswerke-Deutsche Werft in Kiel, Germany, with the remaining three scheduled for construction at Greece's Hellenic Shipyards, west of Athens.

Shortly after the Papanikolis was built in 2001 and launched three years later, Greek navy experts determined a host of technical problems with the T-214 diesel-electric submarine. The most severe: excessive rolling in bad weather conditions when the submarine surfaced for sea keeping in high seas.

After months of haggling over its involvement in the unprecedented European Union bailout to save Greece from defaulting, Germany finds itself at the center of another financial tangle with the debt-ridden Mediterranean nation - this time involving defense contracts Greece could ill afford and the shadowy deals behind them. 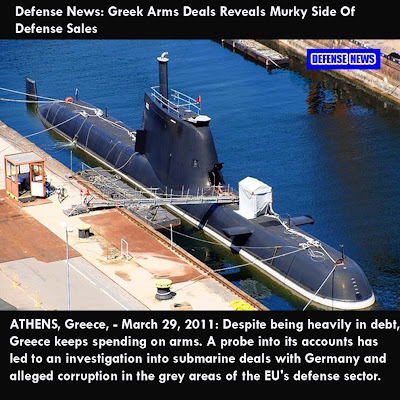 At the same time that German Chancellor Angela Merkel's cabinet was approving 22.4 billion euros ($29.7 billion) in aid to Greece, prosecutors in Germany began investigating whether defense contractors had paid millions of euros in bribes to Greek officials in connection with the sale of two German submarines in a deal worth more than a billion euros.

The investigation, which began in May, is focussing on the deal - part of a larger, complicated decade-old contract to provide Greece with a total of six submarines - struck between Berlin and Athens in March as Greece lurched toward bankruptcy. The investigation is also looking at similar defense deals struck between Germany and Portugal, another EU member state teetering on the brink of financial collapse.

German firm at the heart of bribery allegations

The probe is looking into allegations that Ferrostaal AG, one of the German companies helping to build the submarines, was involved in bribery. Ferrostaal executives are suspected by Munich prosecutors of authorizing payments worth millions of euros to politicians to win the initial deal in 2000 through a Greek company called Marine Industrial Enterprises.

According to records unearthed by the German investigation, Ferrostaal allegedly used false consulting contracts to cover up the bribes before distributing payments to "officials and decision-makers" in Greece. The prosecutors also allege that Ferrostaal accepted fees from other companies for bribes paid on their behalf, in effect operating a policy of subcontracted bribery.

While no charges have been brought in the on-going investigation into the submarine deal, several Ferrostaal executives stepped down in May and three company representatives have been indicted, along with individuals in Portugal linked to the Portuguese deals. The company itself could face fines in excess of 120 million euros if found guilty of bribing officials in Greece and Portugal.

Greece's economic crimes unit is also probing the transaction as part of its investigation into all weapons deals made by Athens over the past decade, deals said to be in the region of 16 billion euros in total, to determine whether Greece overpaid or agreed to deals for military equipment it didn't need.

Greece is the largest importer of conventional weapons in Europe and its military spending, the highest in the European Union, is widely accepted as one of the main reasons for the parlous state of its finances.

EU urged to clamp down on defence sector corruption

The revelations and investigations in the deals between Germany, Greece and Portugal have also prompted members of the European Parliament to call for the EU to launch its own probe, with some officials accusing Germany of making their military dealings with Greece a condition for its involvement in the country's bailout and profiting from Athens' profligacy.

German government officials have vehemently denied that Germany took advantage of Greece's spending habits to land lucrative defense deals and have dismissed claims that its involvement in the rescue package, in which Germany was the largest EU contributor of financial aid, was dependent on agreements being signed.

"This is a very difficult matter," Dr. Christian Moelling, a European defense expert from the German Institute for International and Security Affairs, told Deutsche Welle. "If Greece wants to spend the money, then of course it can but at the moment it is spending EU money...or, in fact, mostly Germany's money."

"The problem is that this submarine deal is an old deal. It was signed in 2000 before Greece had this level of financial problems. As with any deal, it is very hard to get out of the contract and the private actors in this deal have every right to get their money."

As well as the submarine deals themselves, it is thought that "offset contracts" were also signed to the tune of one billion euros. Offsets are arrangements made by purchasing governments with their suppliers, requiring the contractors to reinvest a percentage of the value of the deal in the importing country.

Offset deals under scrutiny in addition to illegal payments

"The arms trade is already an incubator of corruption with such large sums of money flowing around, and all that secrecy," Nick Whitney, a European defence expert at the European Council for Foreign Relations, told Deutsche Welle. "It's so easy to avoid clear accountability about what you've bought, and why. The best antidotes are transparency, and competition. But if you add offsets to the deal, it only gets murkier."

"The temptation to look for offsets - compensation for a big export of state capital - is understandable for some countries especially if you don't have an armaments industry of your own, and so can't expect to get compensated on a 'swings and roundabouts' basis."

Dr. Moelling describes offsets as side deals. "Direct offsets are deals which happen thus: the purchaser will say, for example, 'we want to buy your fighter aircraft but we also want you to provide us with the industrial capability to build the missiles which goes with it.' The seller will perhaps build the factory, pass on the technical knowledge or include the license to build the missiles in the deal for the plane."

"Indirect offsets work in much the same way but the additional deal will include something not attached to original product; we buy the plane, you build a hospital," he added. "These offsets often go beyond just the supplying company and can include participation by the supplier's government. In the case of the submarines, this would be the German government."

Under many trade agreements and in most industries, offsets are illegal but the EU allows them in defense procurement where member states can invoke a "national security" exemption. Opponents of offset agreements say they are negotiated among companies with government favoritism and violate the EU's internal market competition rules.

"In the civilian field, offsets are illegal but in the defense sector, they are legal," Dr. Moelling added. "In the EU, article 346 of the current treaty says that any agreement can be overruled if it is claimed to be in the national security. The problem is that there are many different opinions on offsets in the EU. Germany says they are not helpful as they blur the actual price of products. Greece meanwhile has a very active offset policy while other countries have no official policy. Offests aren't part of any typical market so they're very hard to monitor and are highly politicized."

"The European defense agency recently brokered an agreement amongst European member states to limit offset to 100 percent of the value of the arms contract," Nick Witney said.

"Previously, many member states were looking for a lot more. Austria was the most striking case - they used to demand 300 percent offset. In such circumstances, weapon-buying becomes the least important part of the transaction - the big money is in the offset. So any pretence that you are buying the best weapon at the best price for your military needs goes out of the window - noone can really disentangle why you've bought what you've bought."

The EU has been called upon to tackle the "national security" exemption invoked by member states when dealing in offsets. The EU is planning to introduce a new "defense procurement directive" which will restrict the areas in which governments can use the exemption and demand that the offsets they are involved in are necessary for the protection of security interests and do not break competition rules.

"It's not only on the weapons side of the deal that competition gets distorted," Witney added. "If the arms seller agrees to buy 1,000 trucks from you in compensation, what's that done to all the rules of the single market about fair trade in trucks? The treaties make clear that, although 'national security' gives member states latitude to ignore single market rules in their arms purchases, they must not in doing so distort competition in non-military goods."