Source: DTN News - - This article compiled by Roger Smith from reliable sources Anatoly Miranovsky Bigness - Parvda Russia
(NSI News Source Info) TORONTO, Canada - March 29, 2011: The events in Libya are impacting the economic interests of Russia. While Russian raw materials companies working in this country may still cherish the hope to participate in some projects, the loss of Rosoboronexport's contract with the Jamahiriya will amount to over $4 billion. In the event of the victory of the Western coalition the country's weapons mark 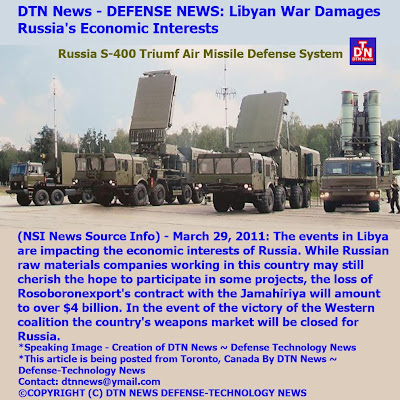 et will be closed for Russia.

With regard to the companies working directly on the territory of Libya, there are three most active Russian companies - Tatneft, Gazprom and the Russian Railways (RZD). Stroytransgaz has an office in the country as well.

Tatneft has been operating in the country for 6 years. The company received a concession to develop an oil block in the Ghadames (Unit 82-4) and won the rights to three oil blocks in the Sirte basin and Ghadames. The Russian company is involved in the projects under the production sharing agreement with Libya's National Oil Corporation (NOC). In 2009 alone it has invested $43 million in the projects.

In 2007, following an exchange of assets with BASF company, Gazprom acquired 49% in oil concessions C96 and C97. According to the memorandum of cooperation with the National Oil Corporation of Libya (NOC) signed in 2008, Gazprom could take part in the tenders for the development of fields, mentions RBC Daily.

The company won the right to conduct exploration in the licensed areas #19 and #64. In mid-February, Russia's gas monopoly announced the purchase of the shares from Italy's Eni in the Libyan oil project Elephant (16.5%) for $163 million. The force majeure will likely prevent this deal from happening.

However, the fate of Iraq and Lukoil suggest that the raw materials companies may be welcomed back, albeit on much worse terms. The Energy Minister Sergei Shmatko said that Russia was hoping to defend its economic interests in Libya, under any scenario in this country, The Moscow Post reports.

Since the opposition has failed to seize Libya right away, the forces behind the rebels have decided to legalize them and gave the rebels more or less official status. Post and telegraph are not very important in the current situation, so the Libyan oppositional National Transition Council has set up its own oil company (to replace the abovementioned NOC) and another nation's central bank, Bloomberg reports. 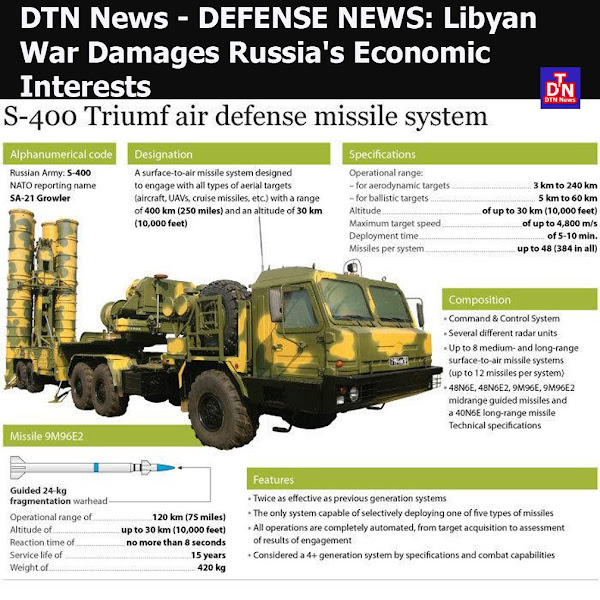 RZD has also contracted with Libya to build a 500-kilometer road Sirt - Benghazi, a modern high-speed (up to 250 mph) railway running along the Mediterranean coast and connecting major cities of the country. The project cost is 2.2 billion euros. To implement the project, a rail welding plant in Ras Lanuf has been launched.

With regard to the exports of the Russian arms, the head of Russian Technologies Chemezov estimated potential losses of $4 billion. However, Russia has only obtained this contract after it has cancelled the remaining Soviet-era state debt of Libya in the amount of $4.6 billion.