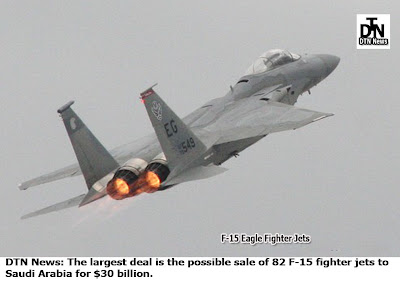 region.The unprecedented sales could reach over $60 billion in pending deals with Saudi Arabia, Kuwait, Oman, the United Arab Emirates and Qatar.
The largest deal is the possible sale of 82 F-15 fighter jets to Saudi Arabia for $30 billion.The deal has caused some concern within Israel which is reportedly in a dialogue with the Obama administration regarding its commitment to retain the IDF’s qualitative military edge in the region.
For another $30 billion, the Saudis are also interested in purchasing as many as 60 Apache attack helicopters.
Another deal, announced over the past week, is the possible sale of the latest Patriot missile defense system to Kuwait for $900 million. The proposed deal would include the sale of 209 missiles.
Kuwait is interested in the Patriot system in face of Iran’s growing influence in the region. In its statement to Congress regarding the deal, the Pentagon said: “Kuwait needs these missiles to meet current and future threats of enemy air-to-ground weapons. Kuwait will use the increased capability as a deterrent to regional threats and to strengthen its homeland defense.”
Israel is also looking to upgrade its Patriot systems and has held talks with the US about the possible sale of the latest version called the PAC-3.
The PAC-3 is believed to be capable of intercepting most of Syria’s missiles. It is an improved version of the PAC- 2 in terms of coverage and lethality. The PAC-3 has an interceptor missile that uses a hit-to-kill system rather than an exploding warhead used by the PAC-2. The PAC-3 missile is also smaller and its launchers can fire 16 instead of just four missiles like the PAC-2.
The Pentagon also notified Congress earlier this month about the possible sale of 18 F- 16 fighter jets to Oman for an estimated $3.5 billion. Oman is one of the few countries in the Gulf which maintains strong ties with both Iran and the US. The Pentagon’s approval of the deal is seen as an effort to bolster American influence in the country.
Kuwait is also looking to improve its air force and has reportedly expressed interest in purchasing Boeing’s new stealthy F-15 Silent Eagle version. At the same time, Kuwait is also augmenting its mid-air refueling capability and is seeking around 10 new tanker aircraft from the US.
In his recent visit to Washington DC, Defense Minister Ehud Barak discussed the pending sale of the F-35 Joint Strike Fighter (JSF) to Israel as the first foreign customer.
Under the pending deal, which has yet to be finalized, Israel will receive approximately 20 of the stealth fighter jets starting in 2015 as a first batch based on the American configuration of the aircraft. Later sales will already include the integration of Israeli indigenous systems.
*This article is being posted from Toronto, Canada By DTN News ~ Defense-Technology News, contact:dtnnews@ymail.com
Posted by DEFENSE NEWS at 6:30:00 AM