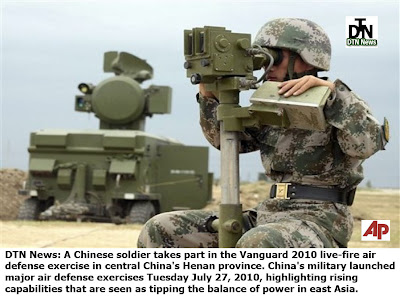 in addition to its assessment of China's military power.
The report routinely overlooks China's peaceful defense policy and ever increasing military openness, saying it sees only "modest improvements in the transparency of China's military and security affairs," and demanding more information.
The report, which came after a delay of about five months, also alleges "uncertainties" remain as it tries to assess China's military intentions.
"The limited transparency in China's military and security affairs enhances uncertainty and increases the potential for misunderstanding and miscalculation," says the report.
The report, submitted to the Congress by the Pentagon annually pursuant to U.S. law since 2000, has drawn protest from China over its interfering nature, distortion of facts, and baseless speculations.
China has been submitting annual reports to the United Nations on its military expenditure since 2007.
It has also invited military representatives from many countries to observe its war games, conducted joint military exercises with its neighbors and countries including the United States.
The Washington Post says the 83-page report, which was originally due out by early March, is more ambitious in scope as it includes a discussion of the Pentagon's view of China's broader strategy and U.S. officials' visions for relations with China.
The newspaper quoted U.S. analyst David Finkelstein as saying that the report contains the message of Washington wanting to expand military exchanges.
Some analysts said the delay of the report, like that of the report by the Treasury on China's currency value, was obviously in line with their role of serving U.S. interests in playing down differences in bilateral relations.
The report, as usual, interferes with the internal affairs of China by making willful comments on the situation across the Taiwan Straits.
Beijing has "continued unabated" the military build-up near the Taiwan Straits, and that "the balance of cross-Strait military forces continues to shift in the mainland's favor," it says.
China's economic achievements and technological progress have enabled the country to embark on a comprehensive transformation of its military, the report says.
"Current trends in China's military capabilities are a major factor in changing East Asian military balances and could provide China with a force capable of conducting a range of military operations in Asia well beyond Taiwan," it said.
The title of the report for this year is Military and Security Developments Involving the People's Republic of China, in contrast to the Military Power of the People's Republic of China over the past years.
The Pentagon report acknowledges that the Chinese military has contributed to global peacekeeping and humanitarian operations and anti-piracy operation, calling for more military cooperation.
"The pace and scope of China's military modernization have increased over the past decade, enabling China's armed forces to develop capabilities to contribute to the delivery of international public goods," it says.
The United States welcomes these capabilities, and wants to work with China to develop them further, says the report.
Related News
• Senior Chinese commander calls for intensified military training
• Senior PLA officer vows closer military ties with Australia
• China's air defense exercise tests military hardware
• Chinese military continues air defense drills
• Chinese Defense Ministry introduces new spokesmen, opens military base to media
Posted by DEFENSE NEWS at 6:34:00 AM