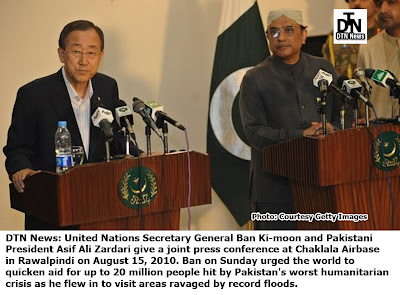 recedented floods and stave off a "second wave of death" from disease.
Torrential monsoon rain triggered catastrophic floods which have affected a fifth of the country, wiping out villages, rich farm land, infrastructure and killing an estimated 1600 people in the nation's worst ever natural disaster.
The United Nations last week launched an immediate appeal for $US460 million ($A512.08 million) to cover the next 90 days and UN chief Ban Ki-moon visited Pakistan at the weekend, calling on the world to quicken its aid pledges.
Officials now estimate that 35 per cent of the funds have been committed.
Japan on Tuesday came forward to pledge an additional $US10 million ($A11.13 million) in emergency aid and Australia promised an extra $US21.6 million ($A24.05 million).
"There are grave risks that the flooding will worsen Pakistan's social circumstances but also its long-term economic circumstances will be potentially devastated," Australia's Foreign Minister Stephen Smith told ABC Radio.
State media in Saudi Arabia said the country had raised $US20.5 million ($A22.82 million) in aid on the first day of a national campaign for the Pakistani floods.
Pakistan cricket on Tuesday pledged more than $US133,000 ($A148,060) for flood victims and said it was working to drum up further funds through an international exhibition match in England.
Flood survivors cramped into sweltering tent cities or camping out along roadsides have hit out furiously against Pakistan's weak civilian government.
Britain, which is emerging from a recent diplomatic row with Pakistan, branded the international response "lamentable" and charities said Pakistan was suffering from an "image deficit" partly because of perceived links to terror.
A UN spokesman said on Monday he feared Pakistan was on the brink of a "second wave of death" unless more donor funds materialised, with up to 3.5 million children at risk from water-borne diseases.
The World Bank also agreed to provide Islamabad with a loan of $US900 million ($A1 billion), warning that the impact of the disaster on the economy was expected to be "huge".
UN chief Ban Ki-moon has urged the world to speed up aid urgently, while Pakistani Foreign Minister Shah Mehmood Qureshi said the country could not cope on its own and warned the disaster could play into the hands of insurgents.
"We fear we're getting close to the start of seeing a second wave of death if not enough money comes through, due to water-borne diseases along with lack of clean water and food shortages," said Maurizio Giuliano, spokesman for the UN Office for the Coordination of Humanitarian Affairs (OCHA).
He said that about six million people were at risk of deadly water-borne diseases, including 3.5 million children.
The United Nations estimates that 1600 people have died in the floods, while the government in Islamabad has confirmed 1384 deaths.
Care International spokeswoman Melanie Brooks said the UN must explain to donor states that "the money is not going to go to the hands of the Taliban".
"The victims are the mothers, the farmers, children," she said.
The nuclear-armed country on the frontline of the US-led fight against al-Qaeda, where the military is locked in battle with Taliban in the northwest.
"At that very crucial time this natural disaster has affected the ability and the capacity and the economy of Pakistan," Qureshi told the BBC.
"The damage and the magnitude is too large for natural resources to cope with it... Pakistan needs your help."
**This article is being posted from Toronto, Canada By DTN News ~ Defense-Technology News, contact:dtnnews@ymail.com
Posted by DEFENSE NEWS at 6:32:00 AM