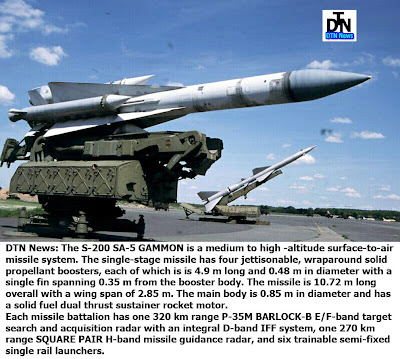 ti-submarine drills near its disputed sea border with North Korea, a report said, as Pyongyang threatened "strong physical retaliation" for the exercise. South Korea has warned North Korea it will not tolerate provocations during the five-day naval drill in the Yellow Sea. The exercise, which Yonhap news agency said got under way in the early morning, is a response to the North's alleged torpedo attack in March on a South Korean warship, the Cheonan, which killed 46 sailors. Military officials from the South said 29 ships, 50 fixed-wing aircraft and 4,500 army, navy, air force, marine and coastguard personnel would take part. North Korea moved long-range anti-aircraft missiles close to the border with South Korea as tensions rose over the sinking of one of Seoul's warships, a newspaper reported Wednesday.
Chosun Ilbo quoted a military source as saying the North moved some SA-5 missiles from the southwestern province of Hwanghae to areas near the border, where they pose a potential threat to South Korean jets.
The missiles were repositioned around the time when the corvette sank in March, it said. A Joint Chiefs of Staff spokesman declined to comment on what he called military intelligence matters.
The aim seems to be to prevent South Korean planes from launching precision strikes on strategic targets in the North in any emergency, the source told the paper.
"When SA-5 tracer radar is activated, our fighters have to fly low to avoid detection. Their activities are consequently somewhat restricted," the source was quoted as saying.
Related News;
*South Korea begins massive anti-submarine drills CNN - Andrew Salmon
*South Korea begins largest anti-submarine drills ever, despite North Korea threats Christian Science Monitor
*South Korea Begins Naval Exercises New York Times
*The Chosun Ilbo - AFP - The Associated Press - Xinhua
Posted by DEFENSE NEWS at 9:10:00 AM