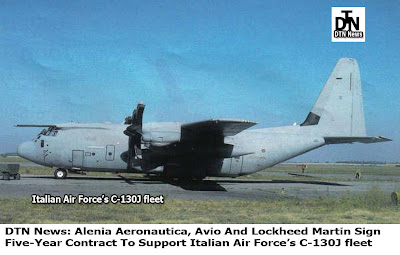 company, the leader of an industrial team with Avio and Lockheed Martin, signed a five-year contract with the Italian Air Force to provide technical and logistical support services to their C-130J airlift fleet.
The contract is worth €155 million and covers a fully integrated service to improve full efficiency and availability of the Italian Air Force's C-130J fleet.
Alenia Aeronautica will be responsible for the supply of spare parts, the management of the supply chain and the equipment maintenance (landing gear included), the maintenance of the Air Ground Equipment (AGE) and engineering support activities, including the C-130J flight simulator based at the 46th Air Brigade of Pisa.
Avio, world leader in aerospace propulsion, will be in charge of the complete propulsion system, including overhaul and technical/logistical and engineering assistance to the 92 AE2100D3 engines of the Italian military fleet.
Lockheed Martin, which designed and built the aircraft, will be responsible for the supply of repair components produced in the US and for any modifications.
With this contract, the Italian Air Force had reconfirmed its trust in Alenia Aeronautica, Avio and Lockheed Martin, companies that have been providing support and technical and logistical assistance to the C-130J fleet since 2007.
The Lockheed Martin C-130 is the US Air Force principal tactical cargo and personnel transport aircraft, and the C-130J Hercules is the latest model, featuring a glass cockpit, digital avionics and a new propulsion system with a six-bladed propeller.
The C-130 has been in continuous production since 1954 and over 2,300 Hercules have been built for 67 countries. The improvements built into the C-130J, which entered production in 1997, have enhanced the performance of the aircraft in terms of range, cruise ceiling time to climb, speed and airfield requirements.
A stretched version, the C-130J-30 has been developed and is designated CC-130J by the USAF. The first C-130J-30 for the UK RAF (the launch customer) was delivered in November 1999.
The C-130J entered active service with the USAF at Little Rock Air Force Base in April 2004 and was first deployed in December 2004.
The first combat airdrop for the USAF was in July 2005. The US Air Mobility Command declared initial operating capability for the C-130J in October 2006.
C-130J orders
186 C-130J and C-130J-30 aircraft have been ordered and over 150 delivered. Orders are : US Air Force, Air National Guard, Marine Corps and Coastguard (89 C-130J and C-130J-30 and 20 KC-130J tankers), UK (ten C-130J, 15 C-130J-30 all delivered), Italian Air Force (12 C-130J and ten C-130J-30 all delivered), Royal Australian Air Force (12 C-130J, all delivered), Kuwaiti Air Force (four C-130J-30) and the Danish Air Force (four C-130J-30 all delivered).
In April 2004, the US Marine Corps formally accepted the first KC-130J tanker / transport into service. The aircraft was first deployed in combat in April 2005 in Iraq. By the end of 2006, 24 aircraft had been delivered.
In December 2006, an additional order was placed for three C-130J-30 for the USAF and one KC-130J for the USMC, for delivery in 2010.
In May 2007, India requested the Foreign Military Sale (FMS) of six C-130J aircraft. The contract was placed in February 2008.
In November 2007, Norway paced an order for the purchase of four C-130J aircraft. One aircraft was delivered in November 2008, one will be delivered in 2009 and two in 2010.
In January 2008, Canada placed an order for 17 C-130J aircraft. First deliveries are planned for the end of 2010.
In June 2008, the USAF ordered six HC/MC-130J special operations variants of the C-130J for delivery from 2011.
In July 2008, the government of Israel requested the sale of nine C-130J-30 aircraft. Also in July 2008, Qatar ordered four C-130J-30 aircraft with deliveries to begin in 2011. In August 2008, Iraq requested the sale of six C-130J-30 aircraft.
The C-130J is crewed by two pilots and a loadmaster. The new glass cockpit features four L-3 display systems multifunction liquid crystal displays for flight control and navigation systems.
*This article is being posted from Toronto, Canada By DTN News ~ Defense-Technology News, contact: dtnnews@ymail.com
Posted by DEFENSE NEWS at 10:05:00 AM