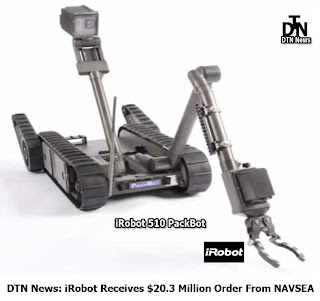 r from the Naval Sea Systems Command (NAVSEA).
The order has been issued as a standalone contract. It calls for the delivery of 125 PackBot Man Transportable Robotic System (MTRS) robots, spare parts and repairs. The PackBot MTRS is modeled after the iRobot 510 PackBot.
The iRobot 510 PackBot is one of the most successful battle-tested robots in the world. The robots are currently being used by warfighters in Iraq and Afghanistan to conduct dangerous missions from safe distances. The 510 PackBot can be used to identify and neutralize roadside bombs, car bombs and other improvised explosive devices (IEDs). It is also ideal for other missions, including reconnaissance and route clearance.
“Robots have consistently proven their worth on the battlefield,” said Joe Dyer, president of iRobot’s Government and Industrial Robots division. “As roadside bombs and similar devices remain a constant threat in Iraq and Afghanistan, it is crucial that we continue outfitting our troops with tools to ensure they stay as safe as possible. The iRobot PackBot is saving lives, and we are honored to be providing this technology to the military.”
iRobot has delivered more than 3,500 unmanned ground vehicles to the military and public safety organizations worldwide.
About iRobot Corp.
iRobot designs and builds robots that make a difference. The company’s home robots help people with smarter ways to clean, and its government and industrial robots protect those in harm’s way. iRobot’s consumer and military robots feature iRobot Aware® robot intelligence systems, proprietary technology incorporating advanced concepts in navigation, mobility, manipulation and artificial intelligence. For more information about iRobot, please visit www.irobot.com.
For iRobot Investors
Certain statements made in this press release that are not based on historical information are forward-looking statements which are made pursuant to the safe harbor provisions of the Private Securities Litigation Reform Act of 1995. This press release contains express or implied forward-looking statements relating to, among other things, iRobot Corp.'s expectations concerning estimates of future revenues. These statements are neither promises nor guarantees, but are subject to a variety of risks and uncertainties, many of which are beyond our control, which could cause actual results to differ materially from those contemplated in these forward-looking statements. In particular, the risks and uncertainties include, among other things our dependence on the U.S. federal government and government contracts, efforts to expand product offerings may not succeed, changes in the policies and spending priorities of governments and government agencies, the complexities of our products, and reliance on limited source suppliers and third-party manufacturers. Existing and prospective investors are cautioned not to place undue reliance on these forward-looking statements, which speak only as of the date hereof. iRobot Corp. undertakes no obligation to update or revise the information contained in this press release, whether as a result of new information, future events or circumstances or otherwise. For additional disclosure regarding these and other risks faced by iRobot Corp., see the disclosure contained in our public filings with the Securities and Exchange Commission including, without limitation, our most recent Annual Report of Form 10-K.
Contact:
iRobot Corp.
Investor Relations:
Elise Caffrey, 781-430-3003
ecaffrey@irobot.com
or
Media Relations:
Charlie Vaida, 781-430-3182
cvaida@irobot.com
Related Headlines
*Incredible Shape-Shifting Robot Able to Fold Itself Into Origami Boat, Sail to Creator's Home, Strangle Him - at Minyanville
*iRobot Receives $20.3 Million Order from NAVSEA- Business Wire
*Boss Creates Robot to Interrupt and Spy On Employees Until That Fateful Day Robot Rewires Itself to Destroy Creator - at Minyanville
*iRobot CFO to Speak at Morgan Keegan Security, Safety & Defense Conference - Business Wire *Cramer's Lightning Round - iRobot Is Not Just Hype (8/2/10) - at Seeking Alpha
Posted by DEFENSE NEWS at 7:50:00 PM