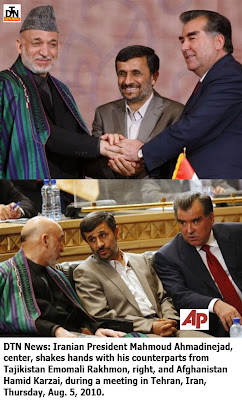 sed last week.
Meanwhile, Iranian President Mahmoud Ahmadinejad on Saturday questioned the death toll in the September 11, 2001, attacks on the United States, saying there was no evidence that 3,000 people were killed, according to Reuters.
The US report reads, “Iran’s financial, material and logistic support for terrorist and militant groups throughout the Middle East and Central Asia had a direct impact on international efforts to promote peace, threatened economic stability in the Gulf and undermined the growth of democracy.
“Iran remained the principal supporter of groups that are implacably opposed to the Middle East peace process,” the report continued, highlighting the role of the Quds Force – the external operations branch of the Islamic Revolutionary Guard Corps – as the regime’s primary for cultivating and supporting terrorists abroad.
The report points to the Islamic Republic’s provision of weapons, training and funding to Palestinian groups including Hamas, Islamic Jihad and the Popular Front for the Liberation of Palestine.
In addition, Teheran has provided “hundreds of millions of dollars” to support and train Hizbullah, including hosting thousands of the group’s fighters at training camps in Iran.
The report also notes that “while Israel remained vulnerable to rocket and mortar attacks launched from inside Gaza, it continued to be largely successful in confronting the threat posed by suicide bombers and rockets from the Palestinian territories.”
It also cited Israel’s transfer to the Palestinian Authority of control of territory in the West Bank as security conditions allowed.
Overall, terrorist attacks dropped worldwide by about 6 percent, which corresponded to a 5% decrease in death from such attacks. More than 15,700 people were killed by terrorists in 2009.
More attacks took place in South Asia than in the Middle East, the first time that’s occurred since the reports began to be compiled. Congress mandated the annual terror report following the attacks of September 11, 2001.
“In South Asia, incident totals have crept up, so that for the first year, since we’ve been doing this at least, South Asia has proven to be more violent than the Middle East, [and] the rest of the world basically flat,” National Counterterrorism Center Deputy Director Russ Travers told reporters on Thursday after the report was released. “In the Middle East, what we’ve seen over the last three or four years is a pretty substantial decline in total number of incidents.”
Ahmadinejad, in his speech on Saturday, also accused the United States of trumping up the September 11 attacks to “create and prepare public opinion” for the wars in Afghanistan and Iraq, and said that no “Zionists” were killed in the attacks because “one day earlier they were told not go to their workplace.”
Ahmadinejad has previously denied the September 11 attacks, calling them “a big fabrication.”
Ahmaedinejad said, “They announced that 3,000 people were killed in this incident, but there were no reports that reveal their names. Maybe you saw that, but I did not.
“What was the story of September 11? During five to six days, and with the aid of the media, they created and prepared public opinion so that everyone considered an attack on Afghanistan and Iraq as [their] right,” he said in the televised speech, Reuters reported.
The Iranian president also repeated his denial of the Holocaust.
**Jerusalem Post staff contributed to this report & link....click here
RELATED:
*US releases 2009 terror report
*US adds more names to Iran terror list
*'Era of discrimination is ending' Press TV
*Ahmadinejad slams West's instrumental use of media Tehran Times
*AFP - National Post - The Associated Press - Reuters Africa
Posted by DEFENSE NEWS at 12:20:00 AM