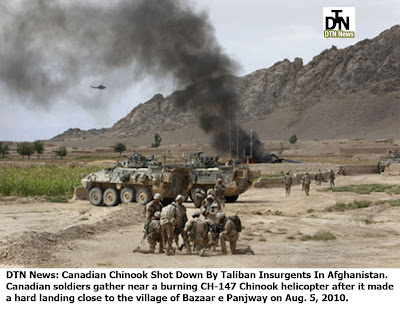 brought down by enemy small arms fire.
The helicopter immediately burst into flames upon landing 20 km southwest of Kandahar city.
Eight of the 21 people aboard the Canadian CH-47 Chinook suffered minor injuries.
Brig.-Gen. Jonathan Vance, the commander of Task Force Kandahar, said small arms fire struck the aircraft, igniting a fire that forced the aircraft to land and then eventually destroyed it.
"Although a helicopter has been lost, this incident highlights the skills of Canadian air crews deployed in Afghanistan," said Vance.
"The fact that no one was seriously harmed during the emergency landing speaks to the ability of our aircrews to perform under pressure, which they did in a textbook fashion."
Vance said it is the first significant incident of this nature that has occurred since the Canadian Air Wing was activated in Afghanistan in 2008. He said air crews have accumulated thousands of hours without incident.
The Chinook helicopter was forced to make what the military calls "a hard landing" near the village of Armarah, which is deep in the heart of the Panjwaii district. It's the birthplace of the Taliban and a region where Canadian troops have been involved in an ongoing struggle with the insurgency for the past four years.
There were five crew members and 16 passengers on board. The five crew members included two pilots and three door gunners.
Witnesses say those aboard the Chinook were barely able to get off of the aircraft before it was completely engulfed in flames.
The Taliban took immediate responsibility. Taliban spokesman Qari Yousef Ahmadi had claimed insurgents shot down the aircraft with a rocket.
The site of the landing was immediately secured by Afghan National Police and NATO forces.
It's not the first time a Canadian helicopter has crashed in Afghanistan.
On July 6, 2009, Master Cpl. Pat Audet, 38, of Montreal, and Cpl. Martin Joannette, 25, of St-Calixte, Que., died in Zabul province when their Griffon CH-146 helicopter crashed on takeoff. Three other Canadian Forces members were injured, one of them seriously. A British officer was also killed in the crash.
Last year's crash was believed to have occurred when the chopper clipped a security wall while trying to manoeuvre in a blinding cloud of dust.
Canada now has five Chinook helicopters remaining in its Afghanistan fleet.
It purchased six from the United States a couple of years ago at a price tag of $292 million. The military says they have done yeoman's service since they began flying in Afghanistan early last year.
Posted by DEFENSE NEWS at 12:19:00 AM