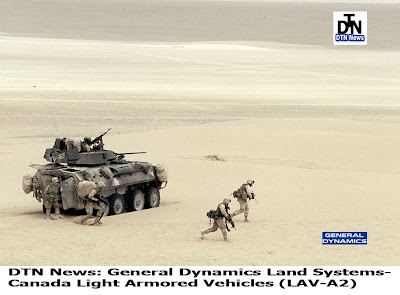 A2) in various configurations for the United States Marine Corps.
General Dynamics Land Systems, the Canadian company’s parent corporation, is a business unit of General Dynamics (NYSE: GD).The LAV-A2 is a mobile, agile and survivable system for conducting offensive and defensive operations in support of the Marine Air-Ground Task Force. The eight-wheeled amphibious vehicle is equipped with enhanced armor protection and an automatic fire-suppression system for crew protection, as well as a robust suspension for mobility.Vehicle production will be performed at the General Dynamics Land Systems-Canada operations in London, Ontario, and will be completed by April 2012.
In total, 207 LAV-A2 vehicles have been ordered by the Marine Corps since 2007. Nearly 800 units of an earlier version of the Light Armored Vehicle entered service with the Marine Corps in the 1980s and continue operational employment today.
The contract was signed through the Canadian Commercial Corporation, a Crown Agency of the Canadian Government.
LAV-A2 standard. Phase I improvements include increased external and internal ballistic armor upgrades, improved fire suppression equipment, and upgrading the vehicle's suspension to the Generation II standard. Phase II upgrades include replacing the turret hydraulics with an electric drive system and replacing the thermal sight with an improved model incorporating a laser range finder.
To reflect the improved significant survivability and capability enhancements occurring today, the LAV is being renamed as the LAV-A2. The LAV-A2 project involved developing and installing an internal and external ballistic protection upgrade package for the Light Armored Vehicles, an automatic fire suppression system for the interior of the vehicle and a Generation II suspension upgrade to support the added weight of the new armor. The suspension upgrade includes new struts/steering knuckles, torsion bars, shocks and mounts and drive shaft. The three-kit armor system provides the LAV with additional survivability against improvised explosive devices (IED) and direct-fire kinetic energy weapons.
LAV-A2 includes the AN/PAS-13 Improved Thermal Sight System (ITSS) developed by Raytheon of McKinney, TX, scheduled for fielding by the end of 2007. The ITSS provides the gunner and commander with thermal images, an eye-safe laser range finder, a fire-control solution and far-target location target grid information.
The new armor will provide 14.5 mm armor-piercing all around protection for both the crew and passengers of the vehicle, along with anti-spall lining in the vehicle to further protect the crew. It will be similar to the protection found on the U.S. Army's LAV-III "Stryker" variant. 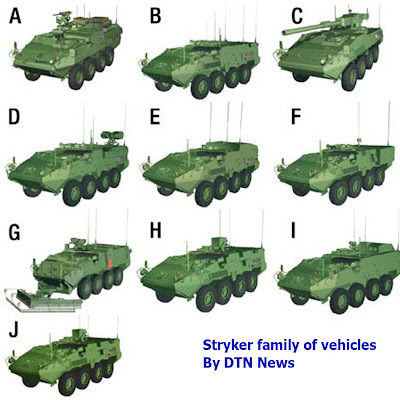 Stryker is a family of eight-wheel-drive combat vehicles, transportable in a C-130 aircraft, being built for the US Army by General Dynamics Land Systems - Canada (formerly General Motors Defense) and General Dynamics Land Systems Division of USA.Stryker is based on the GDLS Canada LAV III 8×8 light armoured vehicle, in service since early 2001. The LAV III is itself a version of the Piranha III built by Mowag of Switzerland, now part of GDLS - Europe. Fabrication and final assembly of the vehicles is being shared among plants at Anniston, Alabama; Lima, Ohio; and London, Ontario.
General Dynamics Land Systems – Canada, located in London, Ontario, Canada, is a business unit of General Dynamics Land Systems of Sterling Heights, Michigan. For over 30 years, more than 2000 highly skilled technical employees have designed, manufactured, delivered and supported to global customers a unique family of light armoured vehicles (LAV). More information on the company is available at www.gdlscanada.com.
General Dynamics, headquartered in Falls Church, Va., employs approximately 91,000 people worldwide. The company is a market leader in business aviation; land and expeditionary combat systems, armaments and munitions; shipbuilding and marine systems; and information systems and technologies. More information about General Dynamics is available online at www.generaldynamics.com.
Posted by DEFENSE NEWS at 3:17:00 PM